Today, we woke up in Bethlehem, PA.  We had the hotel breakfast, which was a step up from the typical hotel breakfast.  Their eggs did not come from powder, the potatoes had actual garnishings, and there was a Greek yogurt bar.  It was definitely an improvement from the typical make your own waffles.  The overall atmosphere was also very upscale and new.  We aren’t foodies but it was a pleasant surprise.

We ate quickly and then hit the road to Cape Liberty, our departure port.  The drive was about an hour and a half to the cruise port.

On the way to the terminal, Zack pulled out a tooth that has been loose for several days!  To say that he was excited was an understatement!  I truly love his unbridled enthusiasm for EVERYTHING!

We arrive at the port, and of course Lucy and Zack get super excited to see the “Big Boat.” 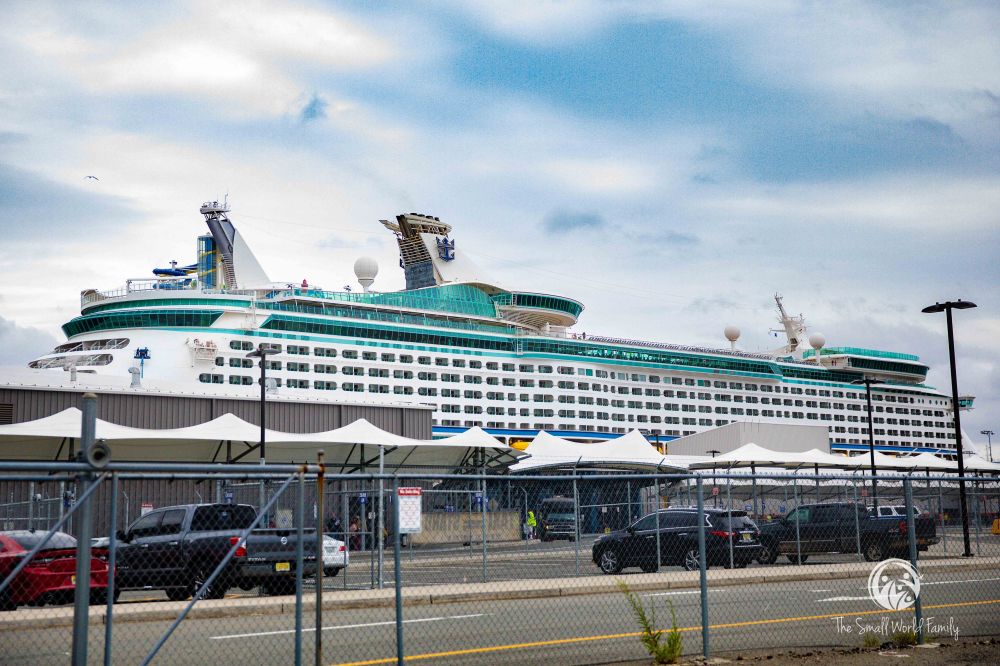 We dropped off our luggage at the terminal.  We have cruised out of Cape Liberty many times, and I feel that they have definitely improved the process of the luggage drop off over the years, as a process that used to take 45-60 minutes now has been reduced to 15 minutes.  The kids and I waited in the terminal as Ramon parked the car.  Getting onto the ship was easy as usual, although, I am not sure if this is a new security regulation, but Ramon had to take ALL of his camera equipment out off his bag to be scanned.  In all of our cruising this had never happened before and held us up a little at security.  Despite that, it was still an efficient process and only took about 20 minutes after Ramon rejoined us to get on the ship.

As we are walking up the ramp to get on the ship, we are greeted by our favorite musical number of all time.  “Wash Your Hands.”  “Wash Your Hands” is a cartoon that Royal Caribbean created that sings about the importance of good hand hygiene … and both of our kids love it!  They fell in love with this song on our cruise from Barcelona to Dubai 2 years ago!  We actually took a video of this cartoon on my phone because Lucy loved it so much.  Anytime she would get upset, whether it be at dinner or on a plane, we would play her the video and she would calm down immediately.  “Wash Your Hands” was our trump card for whenever Lucy would get fussy.  Feel free to indulge in “Wash Your Hands” yourself here.  Be warned.  You WILL NOT get the song out of your head.

After we passed the final checkpoint to get onto the ship, we were stopped by a line.  This is the first time this has happened ever in our Royal Caribbean cruise career.  I go to see what the line is for.  It is for nothing!  One person stopped to talk to a crew member, and everyone else followed suit.  They waited in line like good little sheep.

We were excited to see the ship since it was recently refurbished.  We immediately noticed the new carpet as we went to our stateroom to drop off our bags.

We usually get an inside cabin since we don’t require much space and we are not in the cabin a whole lot.  It is usually the cheapest option, and since it is totally dark, our kids tend to sleep in!!    This perk alone is worth getting an inside cabin.

Royal Caribbean has a pretty consistent theme for The Windjammer, which is the main buffet.  It’s typically dark woods and a greenish colored carpet.  We were totally shocked to walk in to the newly refurbished windjammer.  We were a little disoriented as the place looked sparkling new.  It was definitely a major upgrade from the past. 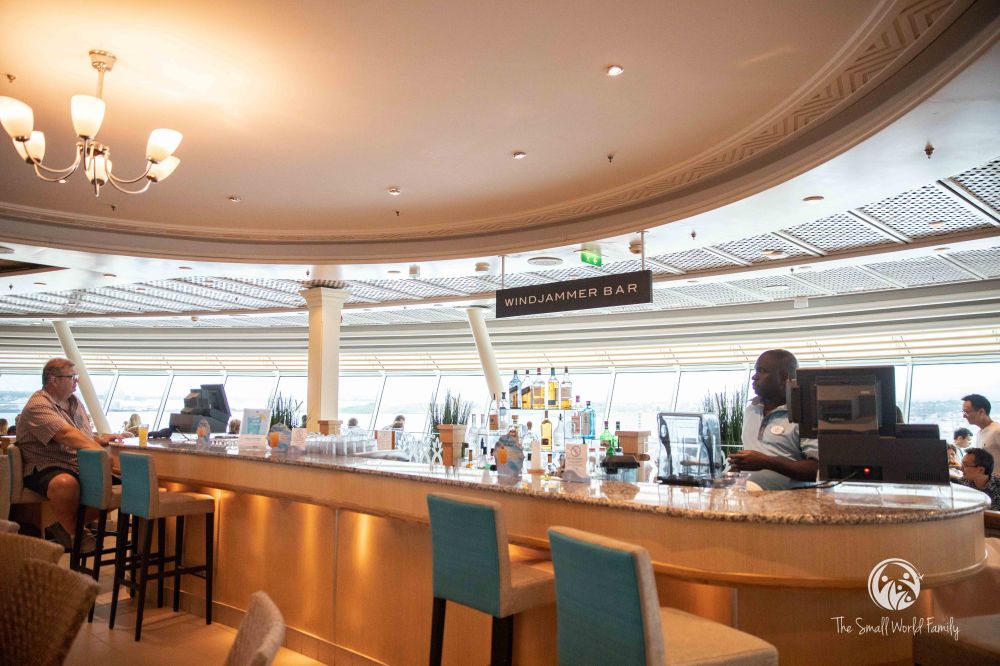 It felt much lighter and airier than before.  They had even installed a hand washing station which is typically found only on the newer ships.  The stations had water AND a dryer built into the sink.

While they were fun, they are not nearly as neat as the auto hand washers found on a Disney ship.

We ate a quick lunch as the muster station drill was earlier than normal at 2:30PM as the ship was leaving port at 3:00PM.  Zack and Lucy had some pizza and fries, and I had a salad.  Ramon had the paella, which is always a cruise favorite.  One of our favorite parts of cruising is the deserts, and Lucy was super excited about the pink cupcake!

We then headed to our Muster Station which was inside the main dining room.  This was a welcome change from some other muster station drills which are held outside.  Zack was asked to help with the life jacket demonstration, and had a blast!

After the safety drill, we went to register the children for the kids program.  You know you’ve been cruising Royal Caribbean A LOT when the Adventure Ocean staff remembers you and your children by name from a previous cruise and ship!  As we walked into the open house, several of the staff that have been with us on past cruises came up to us and said that they were excited to see Zack and Lucy’s name on their list.

After registration, we went up on deck to check out the sail away party and play around on deck for bit.

We then headed back to the room to unpack our luggage.  On the way back to the room we randomly ran into a piece of artwork that the kids were really into.  It was made out of cloth and had an interesting texture. 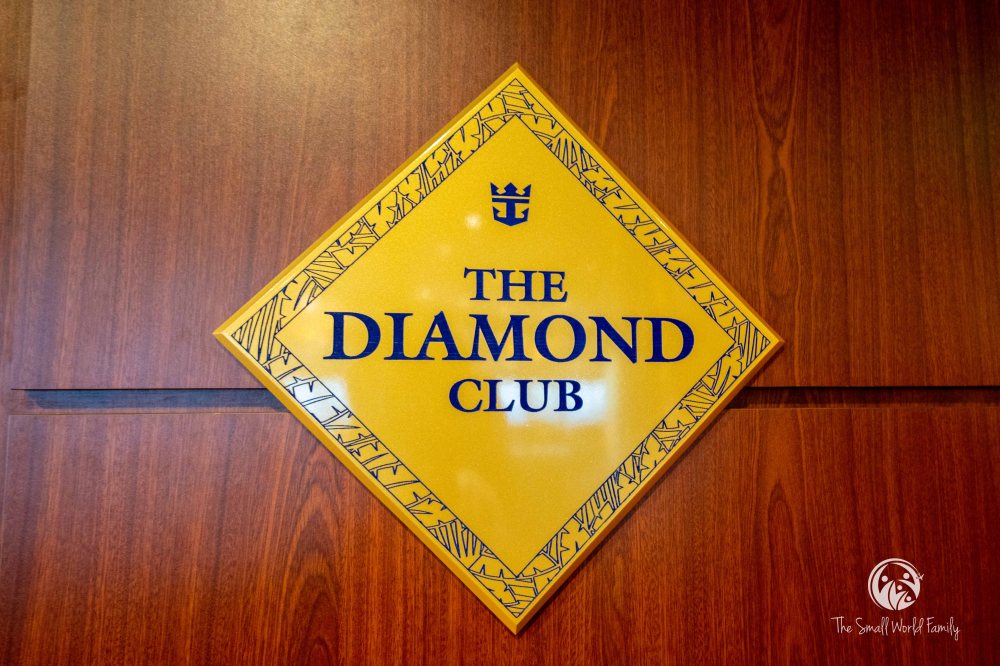 You also get three drink vouchers to use around the ship.  In the morning, they have continental breakfast and specialty coffee.   Overall, it’s an awesome perk, and we absolutely take advantage of it!  Tonight, they had chocolate covered strawberries, which is Ramon’s favorite, and Rice Krispie treats for the kids.

We were originally going to go to the main dining room tonight for dinner, but decided to go to The Windjammer for dinner since it was Asian night.  Ramon was in heaven.   They had all of his favorites from Siopao to Asian ribs with white rice!  Ramon ended up with some make your own Mongolian BBQ.  Zack enjoyed it as well and downed all of the steak that he chose!

After dinner we went to see about 1/2 of the welcome aboard show.  We left to go to the Schooner Bar and play some trivia.

Trivia is Ramon’s favorite thing to do on a cruise ship and heaven forbid he actually miss a trivia contest.  The trivia was “songs of color”, so all of the song titles had colors in them.  The cruise director staff played a song, and your group had to write down the title.  We tied for first place, and won a keychain.  It’s always Ramon’s goal to see how many keychains we can win on a cruise.

After trivia, we dropped the kids off at Adventure Ocean for a bit, and went to listen to some live music in the Schooner Bar, which is Royal Caribbeans piano bar.  We wandered around the ship kid free, and visited the library and the sports deck to look at the new Flowrider and water slides they installed during dry dock earlier this year. 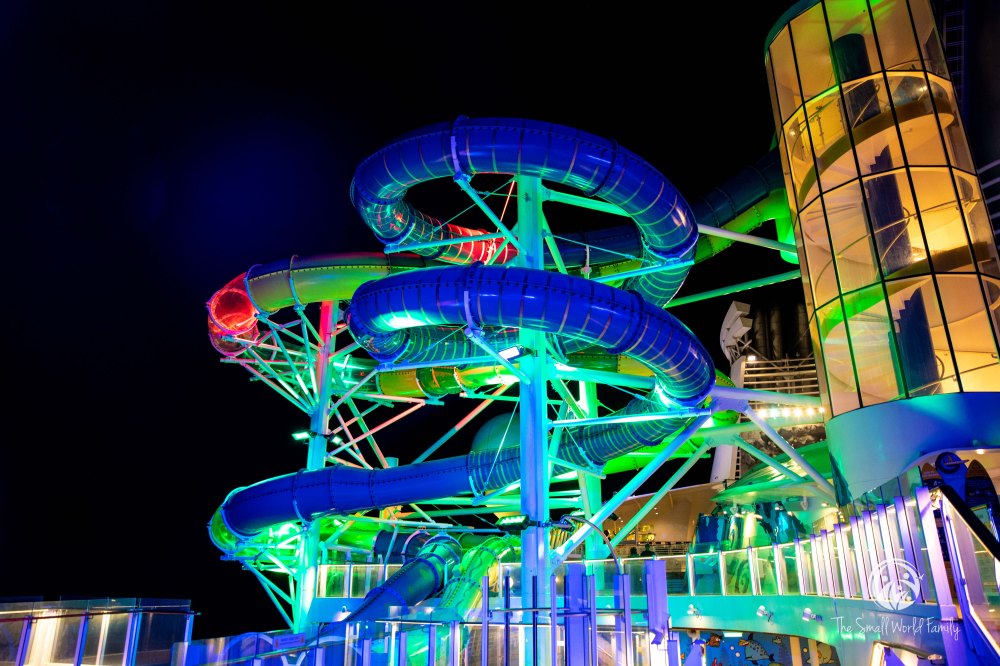 We picked up the kids at 10pm and called it a night.  Zack was super excited to go to bed to see what the tooth fairy would bring him tomorrow.

Tomorrow is a day at sea, my favorite!  Read about it here.

Also if you enjoyed this live blog, please feel free to subscribe to our blog for future updates and live blogs at bottom of the page.  Thanks for reading!