We woke up at about 10:30AM Copenhagen time.   I use the term “woke up” loosely, as waking usually implies that one has slept.  This wasn’t the case.  I spent most of the night playing musical beds trying to get both kids to fall asleep and stay asleep at the same time.  Ramon, who was exhausted after a day of driving, and who was unable to nap much yesterday was dead out. Trust me, jet lag makes this usually difficult task seem like climbing Mount Everest.

After a quick shower, we got dressed and went in search of food. We found a reasonably priced pizza place.  It felt like a mom and pop shop, and definitely had a “dive” vibe to it.  After our expensive meal last night, we were glad to save a little money. 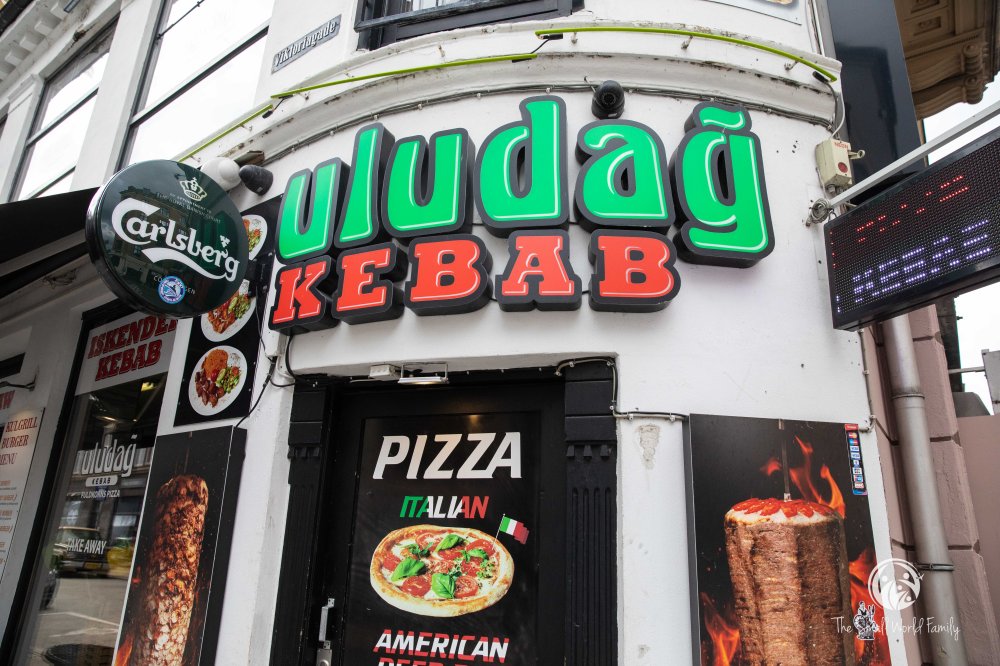 We got a cheese pizza and two Coke Zeros for only $19.  This felt like a bargain after our previous meals in Copenhagen. They had a wide variety of things on their menu, including sandwiches and kabobs.  Overall, we really liked this place, and would absolutely consider eating here again.

After lunch we decided to make use of our Copenhagen Card.  If you ever visit Copenhagen, this is the way to go.  This card gives you access to over 80 local attractions, some that can be fairly expensive.  It includes unlimited public transportation for the duration of the card.  We spent $200 for 3 days on the Copenhagen card.  The attraction that we chose to do first was the Planetarium.  Right behind the planetarium there was a small lake that kids wanted to play at for a bit.

The planetarium had several exhibits set up, and our card also allowed access to a movie that was about an hour long.

We had about an hour and 15 minutes before the show started, so we went to check out the exhibits.  Zack loved learning about the moon, and that there are so many craters on the moon because when rocks and debris crash into it, there is not air or atmosphere to cover up the indentation.  He then, of course, has to teach this to Lucy.

Zack also enjoyed learning about the sun, any how it impacts life on earth.  He thought the fact hat it “looked like lava”  was pretty awesome.

They had several different things to look and play with, from a simulated mission control station to a station where you could feel how much objects weighed at different points in our solar system.  Zack was very interested in learning all that he could.

Zack became obsessed with a video game that required you to use your whole body to steer the rocket ship.  Lucy, however, was not amused, and just wanted to practice her ballet.

She did eventually decide to try it out. 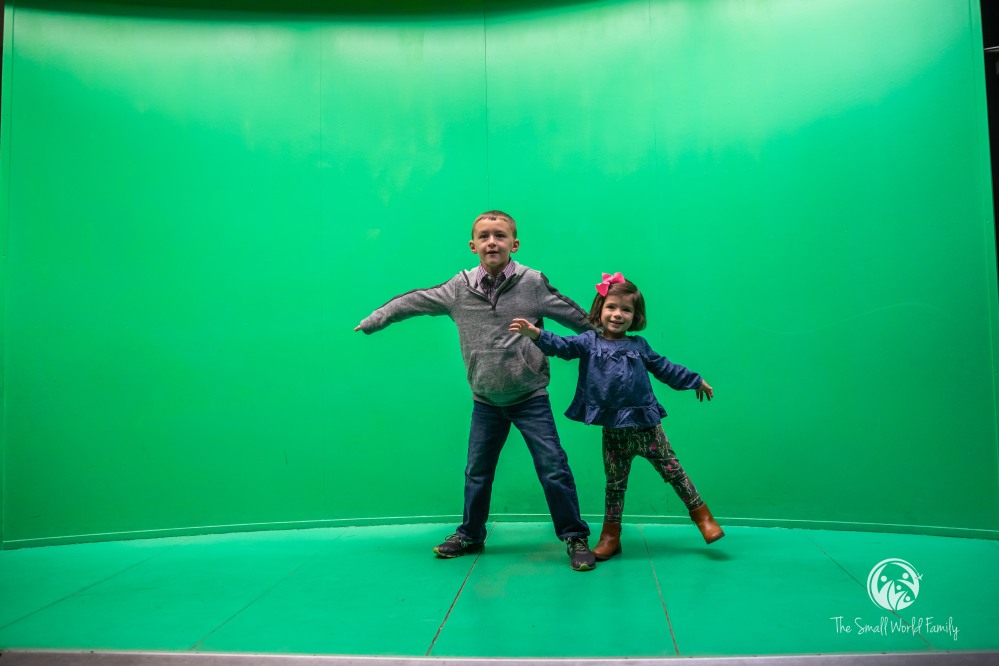 After about an hour, we went upstairs to the theater and found our seats for the movie. 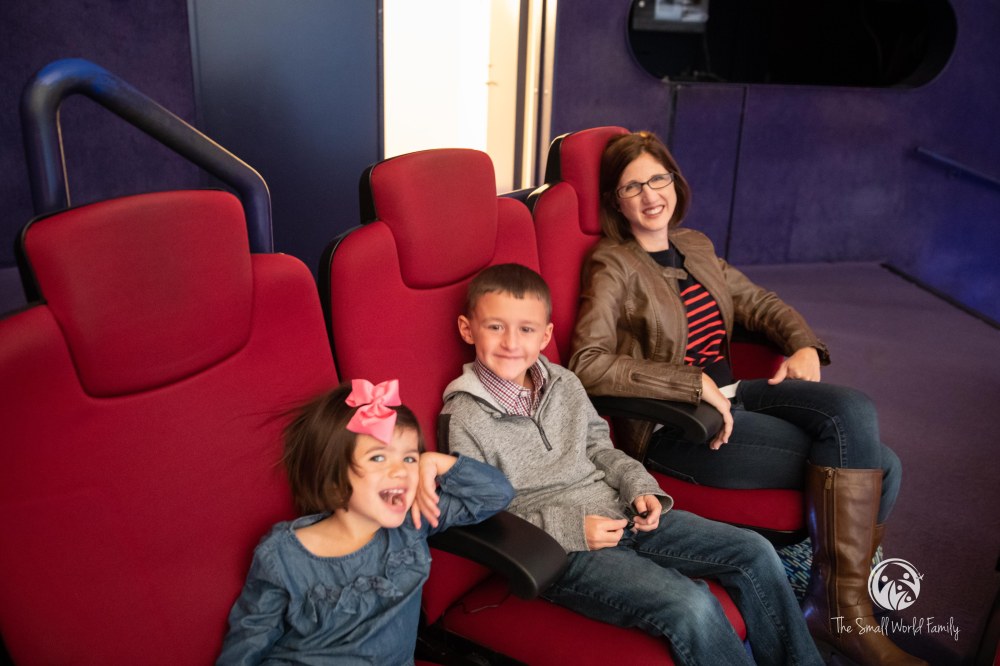 The movie was just in Danish, but they had headphones that you we rented so we could hear the movie in English, so that is exactly what we did. It went through several things such as the formation of the the earth and the compositions of the night sky.  Zack was a little apprehensive at the beginning, but ended up loving it! Lucy just could not hang and fell asleep.  Normally, entrance into the planetarium and the movie would cost about $80 for the four of us, but we got in free with our Copenhagen card.

After the planetarium, we took the bus down to Nyhavn, a historic part of the city.  Lucy, who is always cheery, had a great time riding the bus.

We walked around, and enjoyed the pedestrian atmosphere and the bright, beautiful colors. 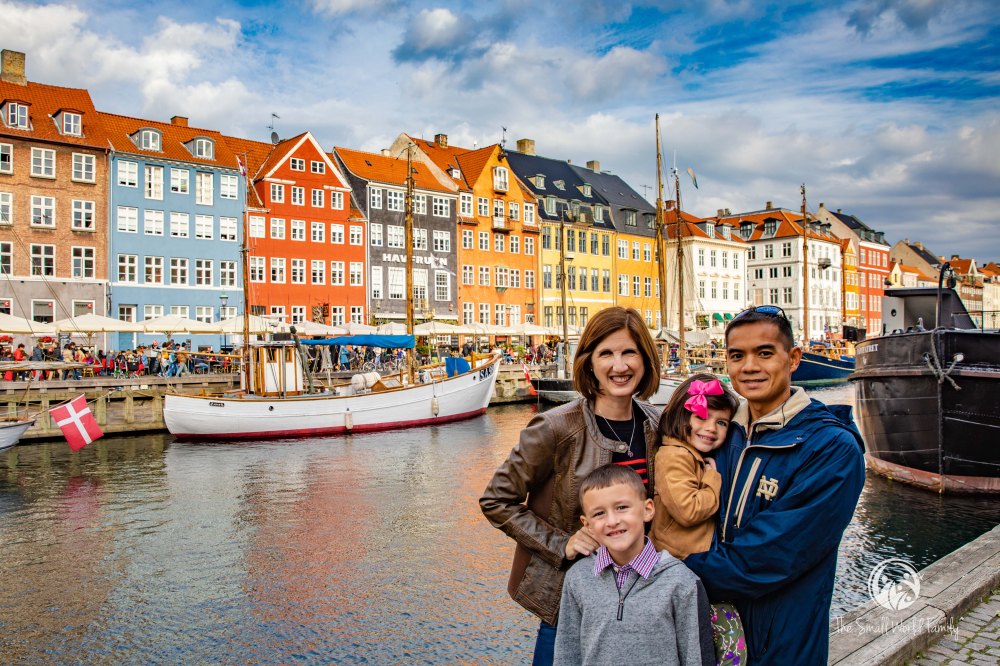 We then chose to do the Netto canal tour which was another activity that was included in our Copenhagen card. 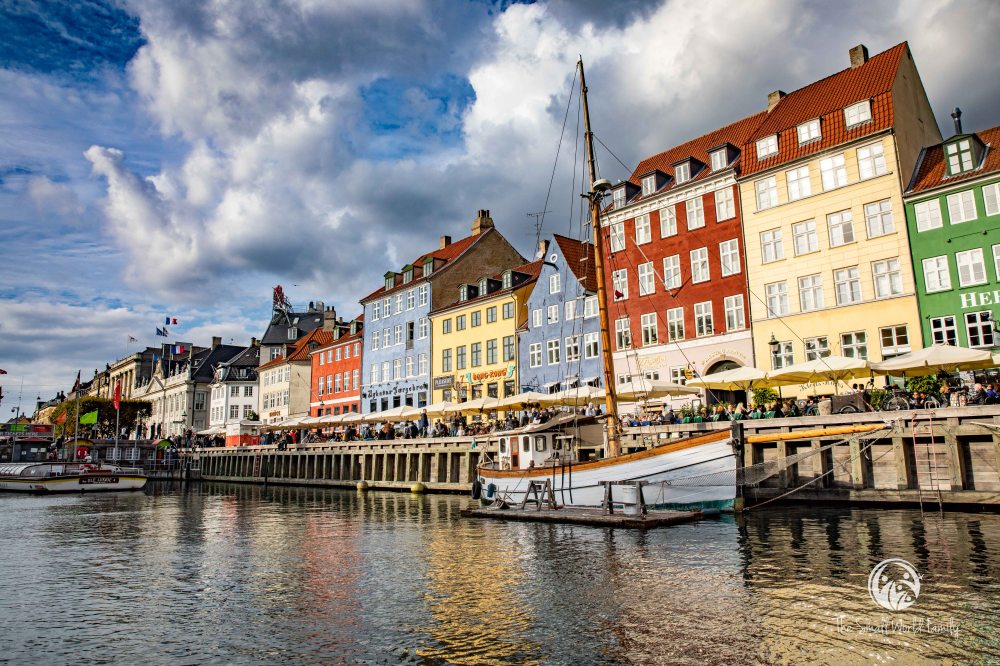 We passed by where the Royal Family stays when they are in Nyhavn, as well as where Hans Christian Anderson lived.  We also got see the Royal Opera House.  A fun fact that you probably don’t know is that they will hold diving competitions off of the rooftop of this building. 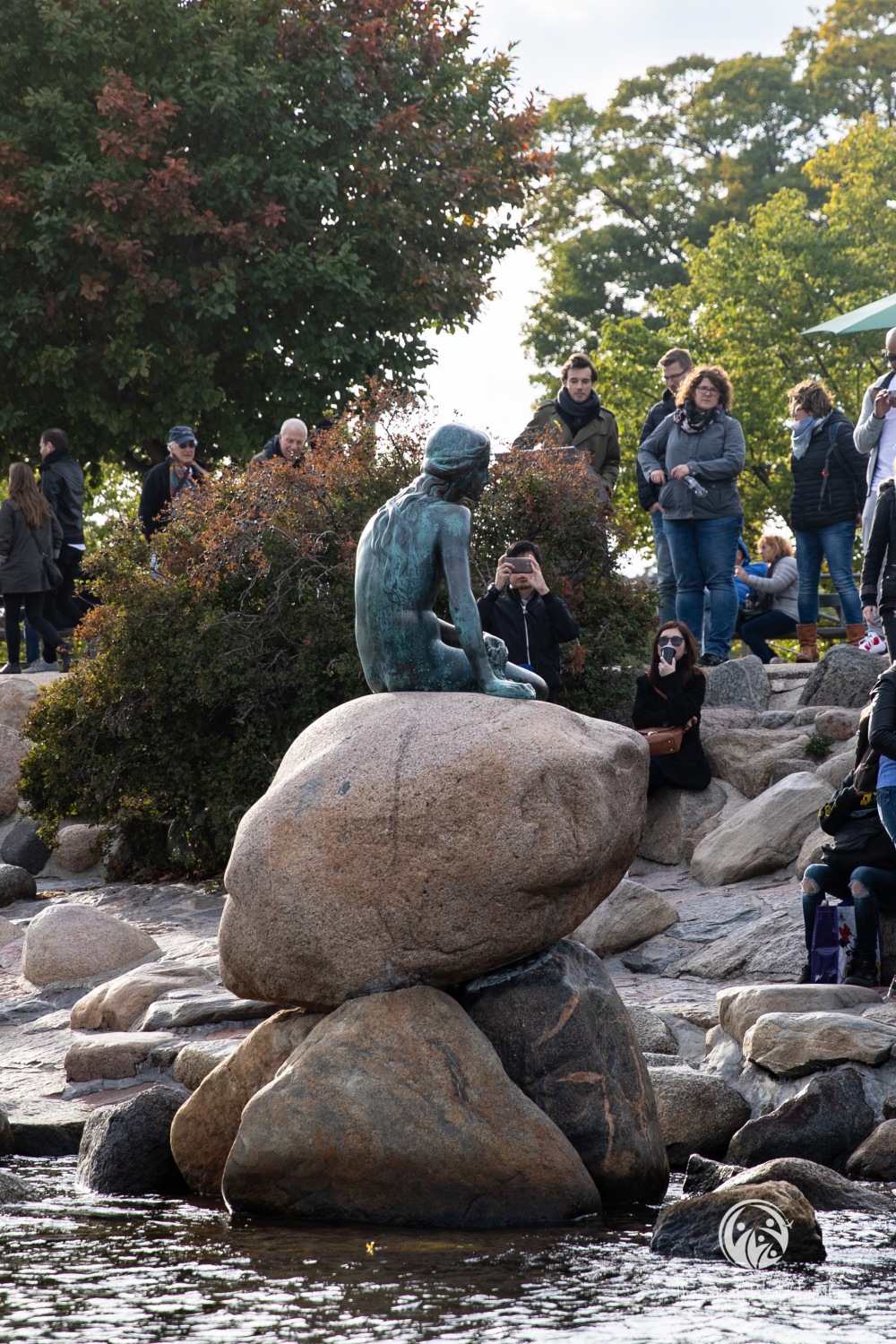 We saw some beautiful architecture during this tour.  We saw buildings that were built long ago to more modern structures, and the vibrant colors were second to none.  Overall, Ramon and I loved this tour and thought it was a good way to get an over view of both the history and the structure of the city.

Zack and Lucy did to agree.  They really did not care about the buildings, colors, or anything really … except for when the tour was going to be over.  Lucy did not care when we saw “Ariel’s statue” as much as we thought she would.  It is her favorite princess after all, depending on what day you ask her.  She did, however, find a ballon.  This was the best thing ever to her!  This tour would have cost us $23, but it was included with our Copenhagen card.

After the boat tour, it was time to eat dinner.  We were all starving, so we walked around  Nyhavn looking for a restaurant. 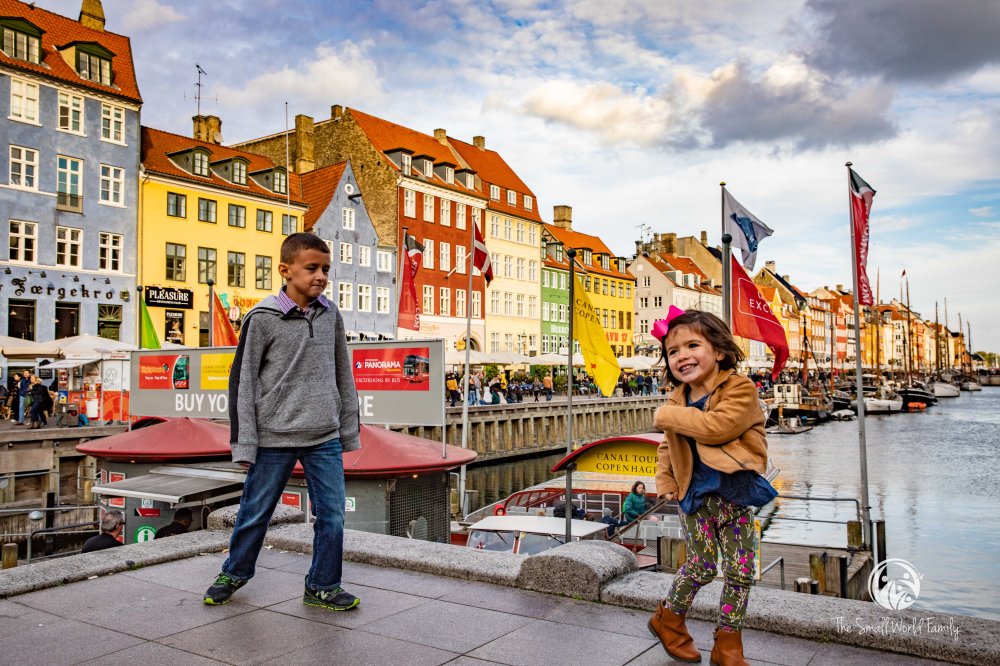 We went to On the Sunny Side, one of the places we passed while walking.  It serves Italian food, so there was pizza, pasta, and calzones to choose from.  It was also among the more reasonably priced cafes that we came across in the area. 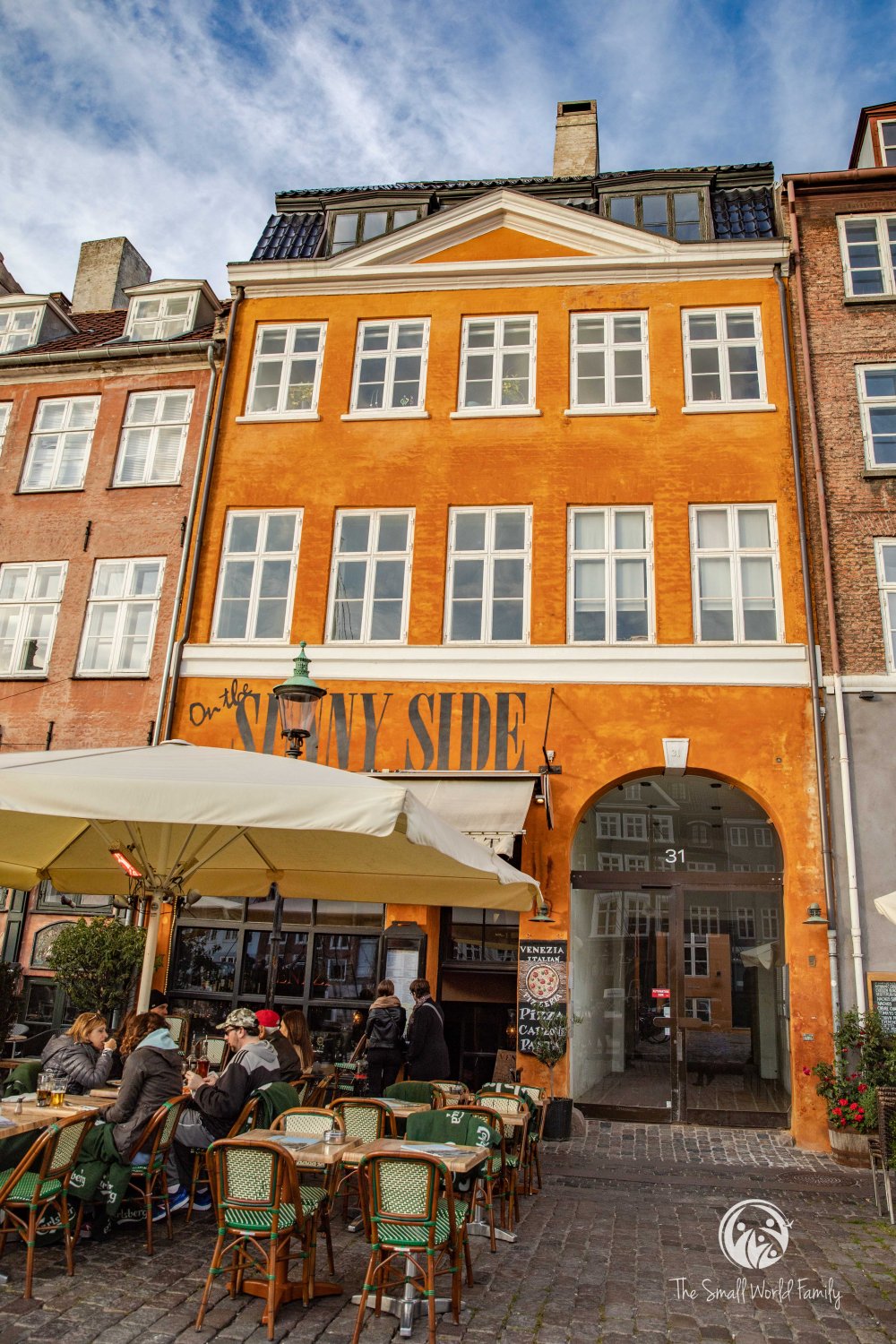 This place actually had a children’s menu, which is unheard of in Europe. We got chicken nuggets and fries for Zack and Lucy, and Ramon and I split lasagna bolognese.  The kids ate all of their food, although i am not sure if they thought these were amazing chicken nuggets or they were just that hungry.  Our lasagna was just ok.  We both thought that it has a little to much sauce for our particular taste.  We ate everything that was served , and the meal came to about $50.

After dinner, we took the bus back to the hostel. We chose to hang out in the common space for a little while, and played foosball and pool.  It did cost money to play the games, but we had a blast and it was absolutely worth it.  Zack even got some goals on Ramon in foosball.  If you have ever played foosball with Ramon, that is saying something.  Even Lucy tried her hand at pool!

A group of Aussie travelers came dow to play shuffle board, and in true Zack fashion, he introduced himself and joined in their game.  He had a great time playing with them.  At about 8:15PM, we called it a night and went up to our room.

Tomorrow is our last full day of sightseeing in Copenhagen before we board our ship, the Norwegian Breakaway.