Disclaimer: Due to the high price the internet on the ship (.99/minute) we were unable to blog live for this cruise.  The events of this article took place on Oct 2, 2018.

Today we woke up in Copenhagen, Denmark.  We decided to let the kids sleep in as long as they could.  We got late checkout, so we did not have to leave our hostel until 1PM. We anticipated that we would want an easy morning, so we ate croissants and a pizzastruegl for breakfast in our room which we bought from Netto, a Danish grocery store, from the day before. After eating, getting dressed and gathering our things, we called a taxi to take us to the cruise terminal. Denmark used to have Uber, but new taxi laws in 2017 eliminated it.

When embarking on a cruise, it is our preference to get to the ship after our cabin is ready. Dragging around backpacks and strollers can be very difficult, and finding a place to sit before cabins are ready can be a challenge.  We arrived at the cruise terminal at about 1:00PM.

This is most of our family’s first time sailing with Norwegian Cruise Line, so we have no perks during embarkation. The check in line was long, but moved quickly. It took us about 15 minutes to get through it and by the time we checked in, no one was left in the queue.

We purchased two bottles of wine to bring on board and were required to pay fifteen dollars per bottle in order to be able to bring it on the ship.

We always look for other children when embarking on a cruise.  This time, we did not see any. We figured that there would not be a lot of kids on this particular cruise due to the duration and time of year… but we were hoping for SOME! Since we were nervous about the number of kids on the cruise to begin with, seeing none during check in was not helping.  The moment we embarked on the ship, our fears were confirmed when we were pounced by the youth staff of Splash Academy, the kids program on board. We were told that there were only 6 kids on the ship that were the correct age to be in the kids program (3-12). For us, this was an all time low. We have been on cruises where the number of children has been in the teens, but never in the single-digits.

We went and dropped off our bags and stroller in our room. We got a typical inside state room. We prefer the inside cabin because it is dark and the kids sleep FOREVER! Our first observation was that the bathroom was much bigger than the ones on other cruise ships we have sailed.

Our second observation was that there is absolutely NO storage space at all! 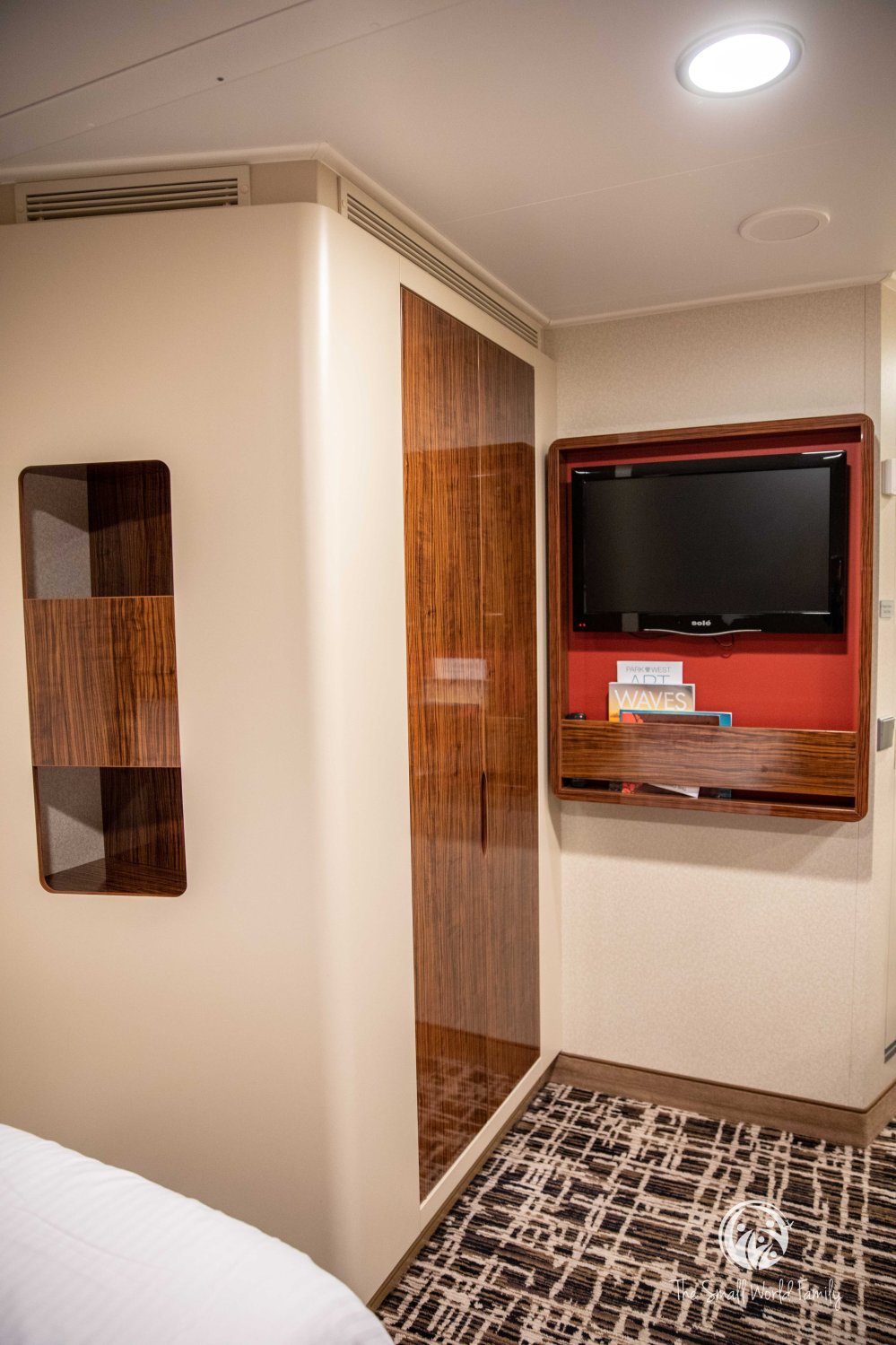 We didn’t have a seating area, but this was expected based on the room plans.

We went to the ships main buffet for lunch, Garden Cafe. The set up of the buffet was a long wall of food spanning the length of the cafe. This was very different than the island set up that we have seen on most ships. We immediately notice the oasis in the desert of adult food deemed inedible by children: the “Kids Corner.”

This section on the buffet serves hotdogs, chicken tenders, pizza, macaroni and cheese, cereal, and several other types of kiddo food! Disney Cruise Line has something similar, and we absolutely love the convenience. For lunch, Ramon ate bourbon BBQ chicken, and Kendall got the steak. Lucy wanted some Fruit Loops and Zack ate ham cubes and fries from the kids corner. As we were gathering food, we notice that they have hand scooped ice cream!  No other cruise line that we have sailed have had this, so its a pretty big deal for us!  Another convenience we noticed is that the Garden Cafe has all of the condiments, silverware, and napkins on that table much like Disney.  Walking to get all of these things can be a nightmare while trying to feed two children and yourself. 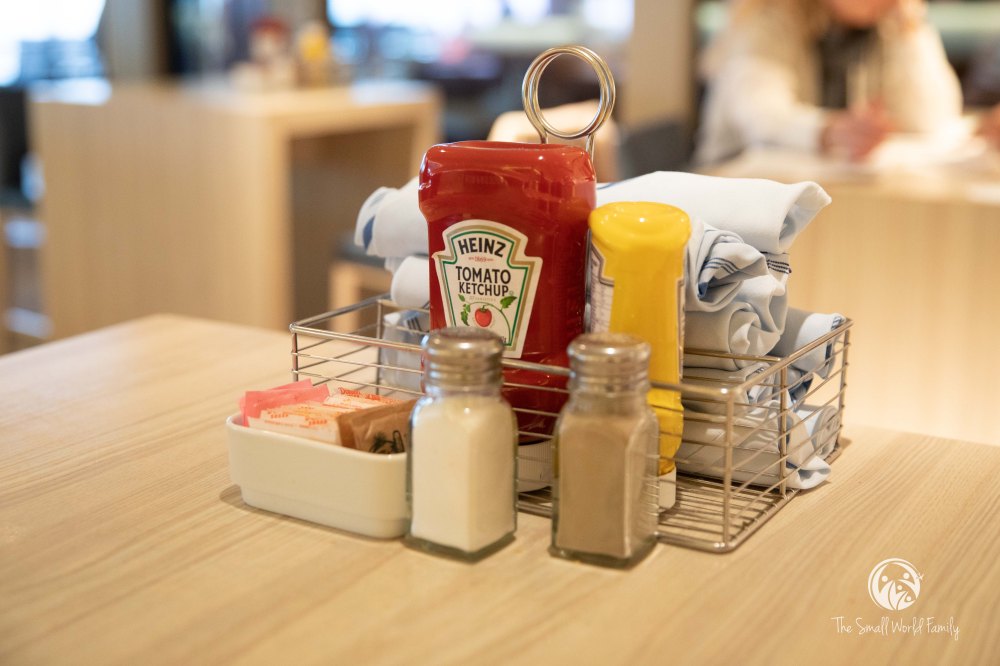 After we ate lunch, we went back to our cabin. Our luggage had already been delivered to our room, so we started to unpack while we waited for the muster station drill.

Muster stations were indoors, which was very nice since it was cold and raining!

We arrived at our station, and were redirected to the library so that we had a place to sit with our kids, which we greatly appreciated.

After muster stations, we went back to finish unpacking.  We really struggled to create any type of organizational system for our clothes due to lack of shelf and storage space. Ramon kept his clothes in a suitcase under the bed. I put my clothes stacked on a top shelf, Zack’s clothes went on the very narrow side shelves in the closet, and Lucy’s clothes went in the vanity. You might ask why we did not put our clothes in drawers. Because there were NONE! We have cruised over 140 days in inside cabins, with a good number of those with a pack and play for our then infant daughter and son. This is the first completely drawerless room we have ever been in!

After we unpacked, Lucy and I napped while Zack and Ramon went to explore the ship. They played soccer and ping pong, but everything else was closed because it was wet. Despite being wet, they had fun, and the weather even lightened up a little.  It turned into a beautiful day.

An announcement came over the PA system saying that our departure was delayed. The captain went on to explain that a flight from JFK to our departure point, Copenhagen, was delayed, and we were waiting for them. We learned from the crew that this flight was delayed by about 2 days and had several hundred cruise passengers on it.

The weather continues to improve throughout the afternoon, and the sky was a beautiful blue.  It was even clear enough to see windmills in the distance. 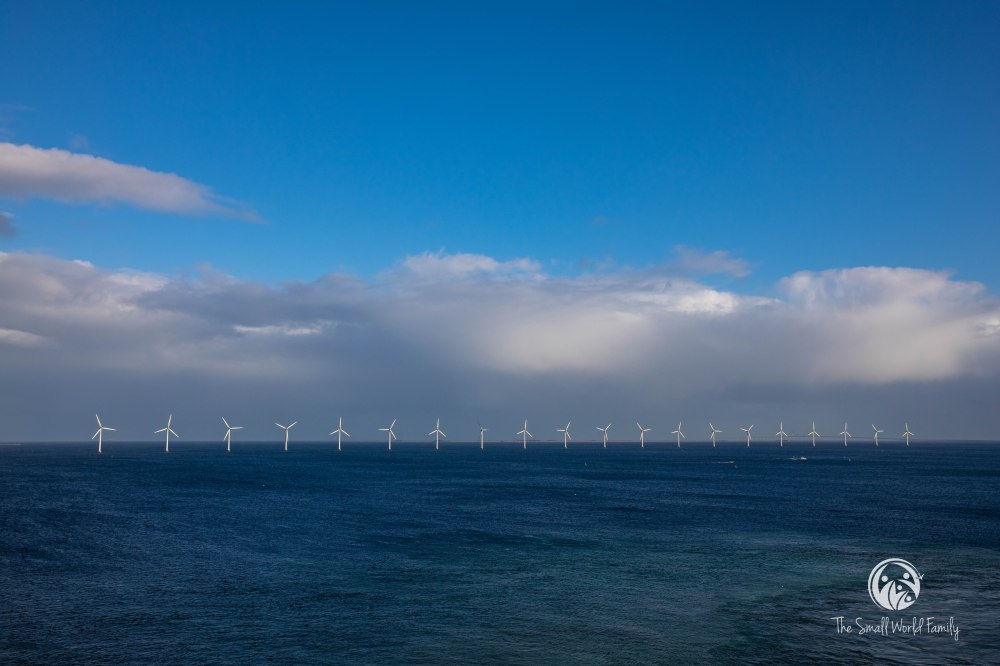 Throughout our travels, we have heard others say that one of the perks of Norwegian Cruise Line is that they have an awesome 24 hour complimentary dining option, O’Sheehans.  We were excited to try it out, so we went there for dinner.  I had spinach and artichoke dip, Ramon some wings, and both kids had hotdogs. It did not disappoint.

After dinner, we dropped the kids off at Splash Academy.  The space was very well lit and nicely decorated. 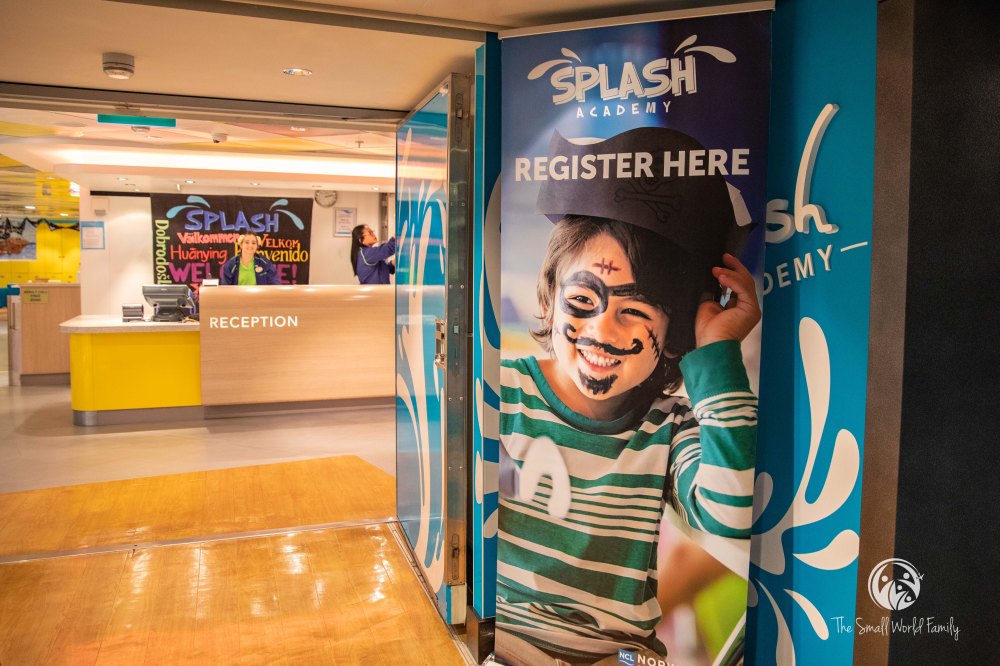 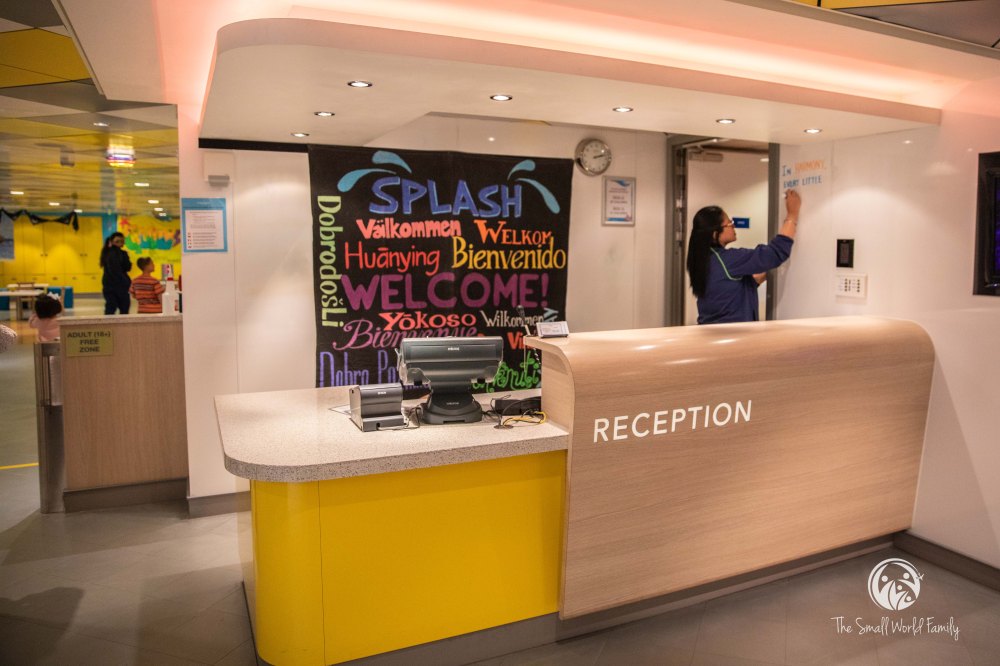 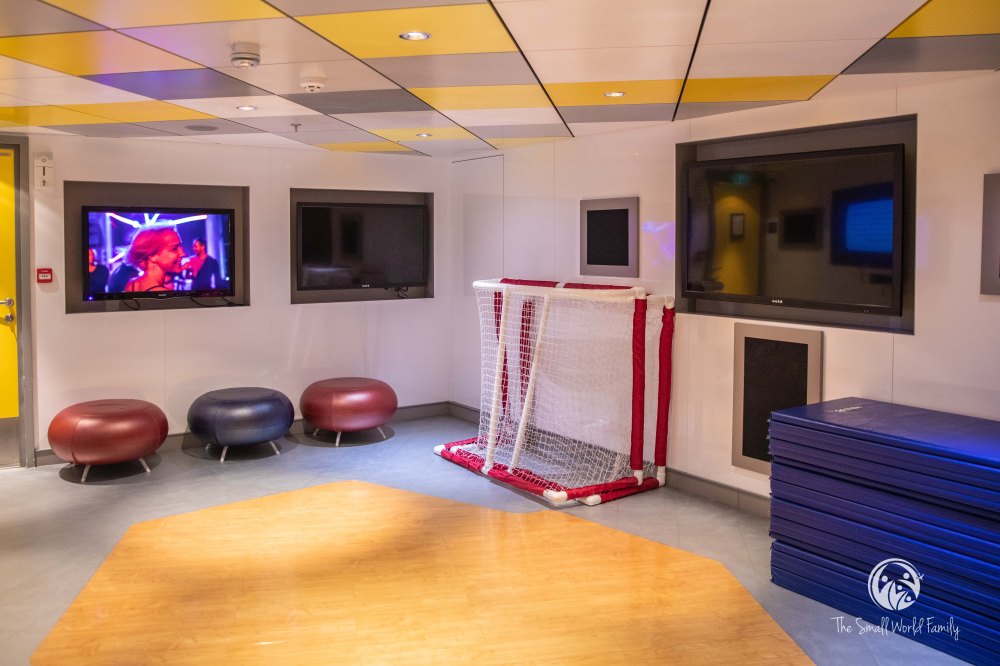 Ramon and I headed to the Welcome Aboard Show.  Traditionally, this show is not well attended. We did not anticipate having difficulty finding seats! We could not even get inside the theater to see the show! Little did we know that this would be our introduction to the theme of this cruise: NO SEAT FOR YOU! 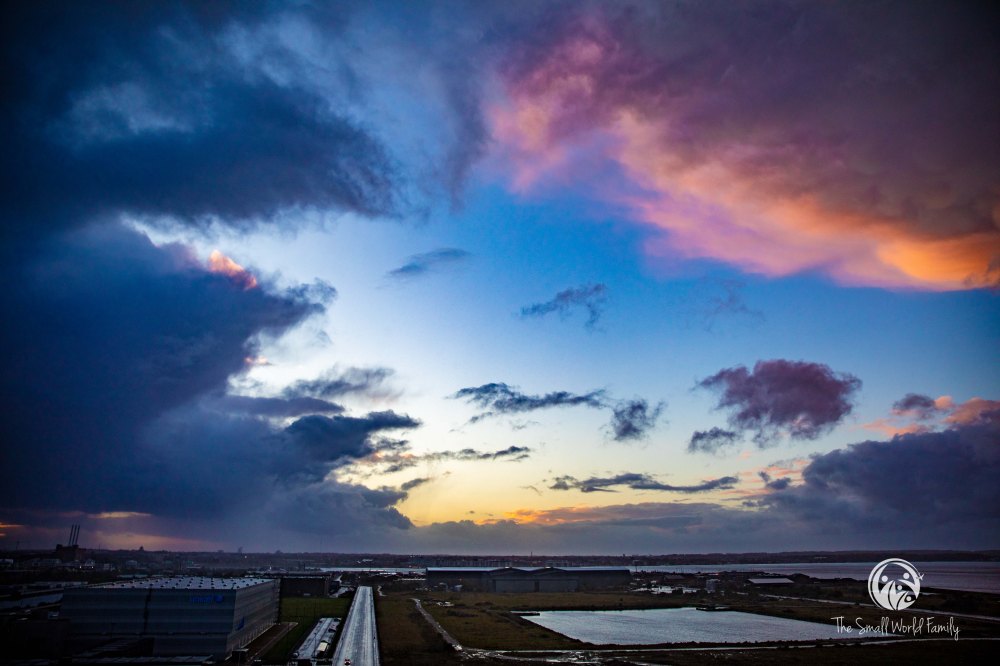 The staff at Splash Academy ask that you let them know where you are on the ship in case they need to get a hold of you. After we ordered our drinks, I call to update our location per the staff’s request. When I called, they told me that Lucy threw up.  Of course she did cuz that’s what she does, just like on Day 1 of our trip out west!  We go pick her and Zack up and decide to call it an early night since we will be in Sweden tomorrow.

It is no secret that we usually cruise Royal Caribbean!  Here are some quick thoughts on the similarities and differences between the two after embarkation day. NCL is very well maintained compared to RCI. There is no rust anywhere that we could see! The Norwegian Breakaway is very modern and trendy. The public spaces are very well themed on NCL as well. We are not sure which ship design we like better yet, but the first impression is impressive.

The cabin design on NCL is questionable at best. While the bathroom is bigger, there are no storage or drawers in the cabin, making organizing our clothes and toiletries very difficult. We like the cabin design on Royal Caribbean ships we have been on better.