This is the first in a series of articles detailing the logistics in seeing famous sites with children and the reality of the actual outcome.

This article has stemmed from the fact that as we were researching how to take our children and especially our 13 month old to Petra, we could find virtually no information on the logistics of bringing a toddler to see the “Rose Red City.” We eventually ended up calling a friend from the Middle East who had been to Petra to ask him about the logistics of how to move a 13 month old through Petra. We have done some pretty adventurous things as a family, but I must say that this was probably one of the most logistically complex things we had ever attempted to do.

Petra has been on my bucket list ever since seeing Indiana Jones and the Last Crusade. Ever since it became one of the New 7 Wonders of the World it has only increased in popularity. There is something magical about seeing an entire city that was carved into stone walls and forgotten from the world for centuries.

We were on a 16 night cruise starting in Barcelona and ending in Dubai. One of our stops along the way was Aqaba, Jordan off the Gulf of Aqaba, which was the port closest to Petra. It is a two hour drive from Aqaba to Petra. Thankfully the cruise ship was not scheduled to leave until 2200 that night to give the passengers ample time to get to Petra and back.

Petra is about a 30 minute walk from the actual entrance of the park in 90 degree heat over uneven desert terrain. This terrain makes it impossible to use a stroller. The path to Petra is a downhill walk and going out is uphill, which makes the end of the day that much more difficult after a day of walking in the intense heat.

There are bathroom facilities and vendors selling snacks throughout Petra so food and water would not be an issue.

Our children typically have tolerated 3-4 hour bus tours pretty well, and our son has gone on 8-9 hour bus tours without problem, however, our 13 month old daughter,Lucy, is more of a wildcard in regards to tolerating long tours, especially when napping would be difficult. We decided against the typical 8 hour bus tour in this situation and decided to book a private car. By booking a private car we would be able to time it so that we would arrive in Petra right after she had napped. This would also shield a bus full of tourists from the inevitable fussy spells throughout the day. While our daughter travels well, an 8 hour tour is even long for an adult, and we were not 100% confident she would not interfere with the enjoyment of other passengers. While booking a private car was about $200 more than booking a bus tour, the convenience of having our own car (with car seat provided) and the ability to make our own plans made it absolutely worth it. Included in the extra cost was an option to go to the Wadi Rum desert via a 4×4 which is the desert where the movie “The Martian” was filmed either before or after seeing Petra.

In regards to how to transport our daughter through Petra. I bought a backpack carrier so I would be able to hike her through Petra. Ironically, I forgot the backpack carrier in the luggage claim area of Barcelona, and did not realize it after I had already boarded the ship. Thankfully, I was able to retrieve the carrier before the ship left port, but that is a story for another blog post. I had also investigated transportation options within Petra and found that camels, donkeys, and horse carriages were available with limited availability to assist in moving people through Petra. These are all available at a negotiable rate once in Petra, but are not guaranteed.

So our ultimate plans were as such:

Those were the plans…. 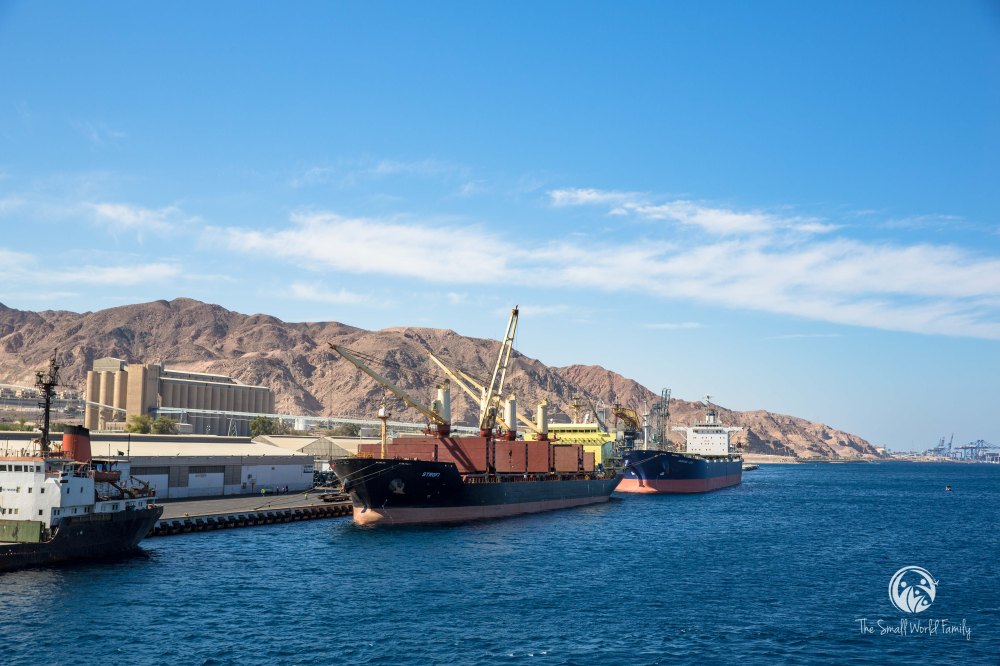 So that morning we woke up and ate breakfast in the main buffet area and disembarked the ship in a timely fashion. We met a man with the company who directed us to a minivan that took us out of the port area. From there we walked to the hotel where we were to meet our driver. Once we met up with our driver, with the car seat already installed in the back seat, we were on our way to Petra. 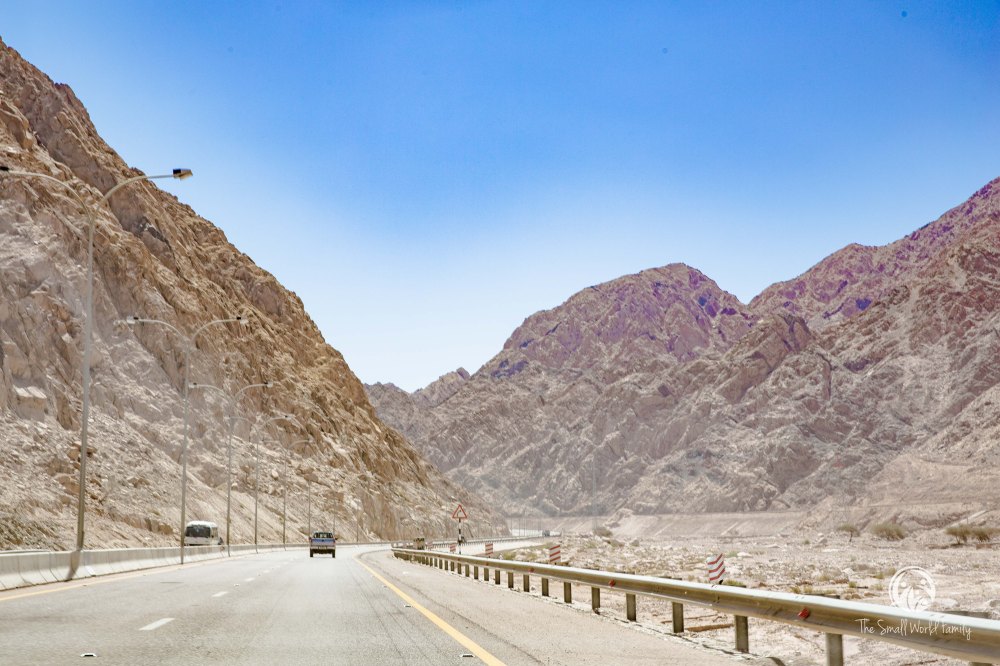 We took a quick bathroom break at a small souvenir store on the way there with a beautiful view.

We were making great time and things were going swimmingly.  Lucy had been napping most of the morning and should have been well rested by the time we had hit Petra.

Unfortunately, about an hour from Petra our car had a flat tire. Thankfully, the car had a spare tire, and our driver was pretty adept at changing out the tire, but this still cost us 45 minutes of time.  Little did we know at the time, that this small hiccup would cause a chain reaction of events throughout the day. The flat tire threw our timing totally off, and Lucy ended up waking up 45 minutes before we were at Petra.

By the time we had arrived at Petra, because we were running late, the decision was made to eat lunch first and go to Petra after lunch instead of vice versa. After all, hangry children, are not happy children, and hangry adults are even worse.  Hangry adults and hangry kids in 95 degree desert heat and you might as well run for the hills.

At this point because of the flat tire and lunch we arrived at Petra nearly two hours after our anticipated arrival time. Lucy had been awake now for nearly 3 hours, and we were well into the time she would be about to go down for her second nap of the day at this point.

Needless to say, a 13 month old who has been awake for three straight hours and was about to be subjected to desert heat was just a recipe for disaster.

Prior to embarking on our trek to Petra, we stopped at the visitor center at the entrance to Petra briefly to use the restroom and change Lucy. 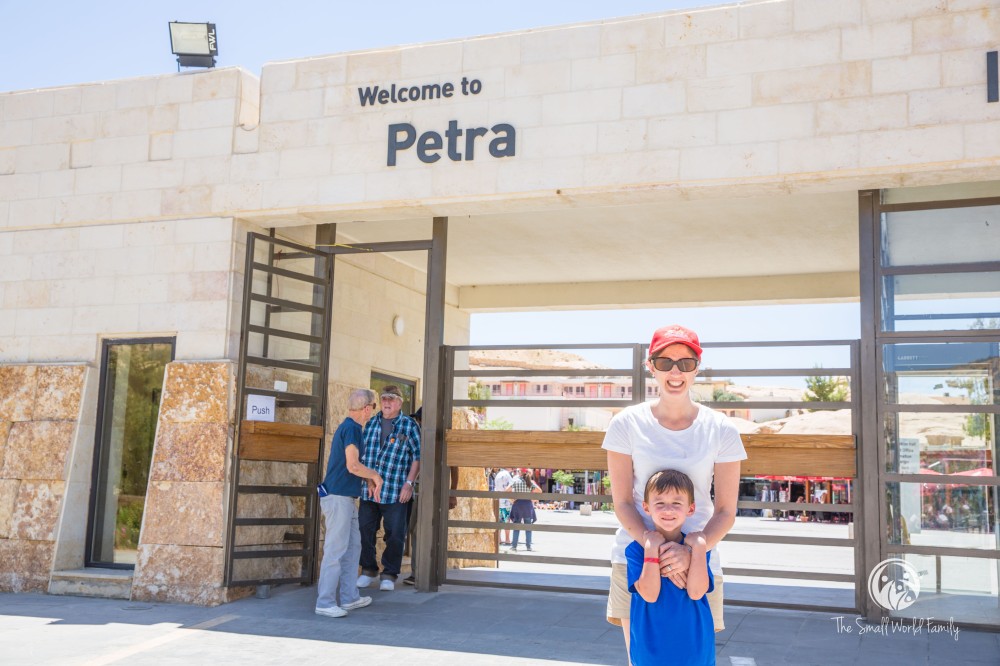 We then began our trek into the canyon that leads to Petra.

The hike into Petra was very impressive.  There were a number of structures carved into and out of the surrounding sandstone.

Lucy being quite exhausted at this point in time was understandably fussy.  Being in a backpack carrier instead of a stroller made it very difficult for her to nap, as she was being jostled around continuously, waking her up every time she fell asleep.  It was about a 30 minute walk into the canyon to get to Petra. 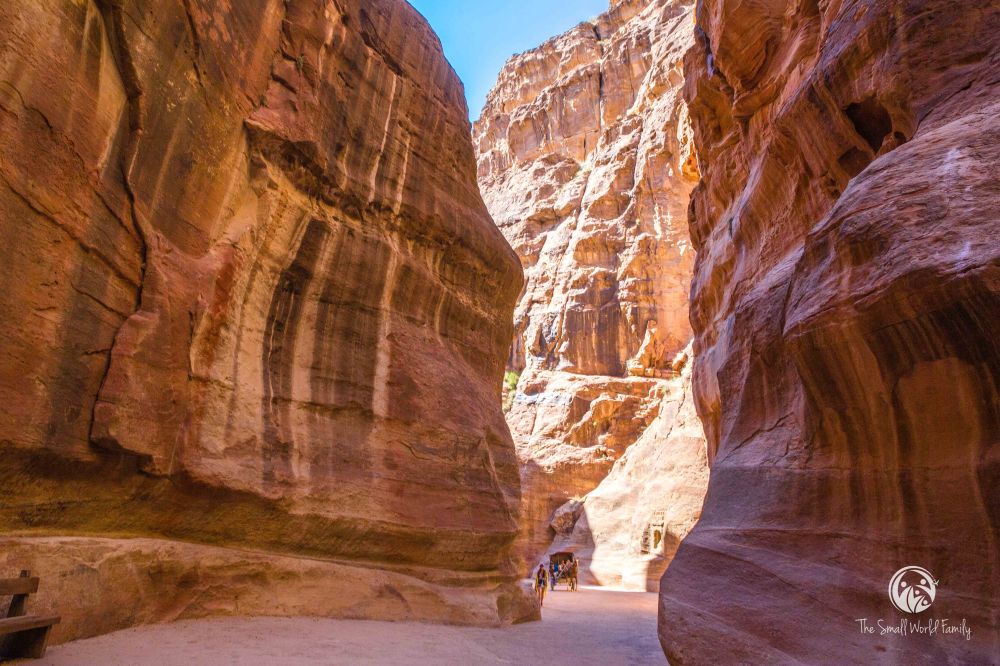 There were definitely parts where a stroller may have been feasible as some areas were even paved, but some areas were very sandy and rocky.  A good jogging stroller with 12 inch wheels or larger may have done ok, but I was definitely glad I brought the backpack carrier for this.  A stroller would likely have been more frustrating than it was worth as there are definitely areas where the sand is thick and rocks are plentiful.  There are also several places in Petra that you can only go up via stairs, and in those cases a stroller would have been worthless.  Unfortunately, due to time constraints we were unable to see those areas that were higher up. We definitely plan to return some day to Jordan and see all of Petra.

Being the photographer of our family,  I unfortunately have very few pics of me and Lucy at Petra, but we did manage to snag one family photo.

Petra definitely lives up to the hype. It is absolutely marvelous and as mystical as I thought it would be and the culmination of every kids life long dream to see where Indiana Jones “chose wisely.”  Unfortunately, as expected based on the timing of our day, Lucy was a little on the fussy side at this point. She did eventually fall asleep in the backpack carrier while we were riding a camel just out of sheer exhaustion.  While we would never expect a 13 month old to ever appreciate something like Petra, Lucy is typical a pretty happy and easy going baby, but the 90 degree heat and ill timed nap schedule unfortunately did not make it her best day.  Zack, who was 5 years old at the time, however, absolutely loved it.

He was absolutely obsessed with the camels and the “baby horses” (mules) and was so excited to ride both of them. 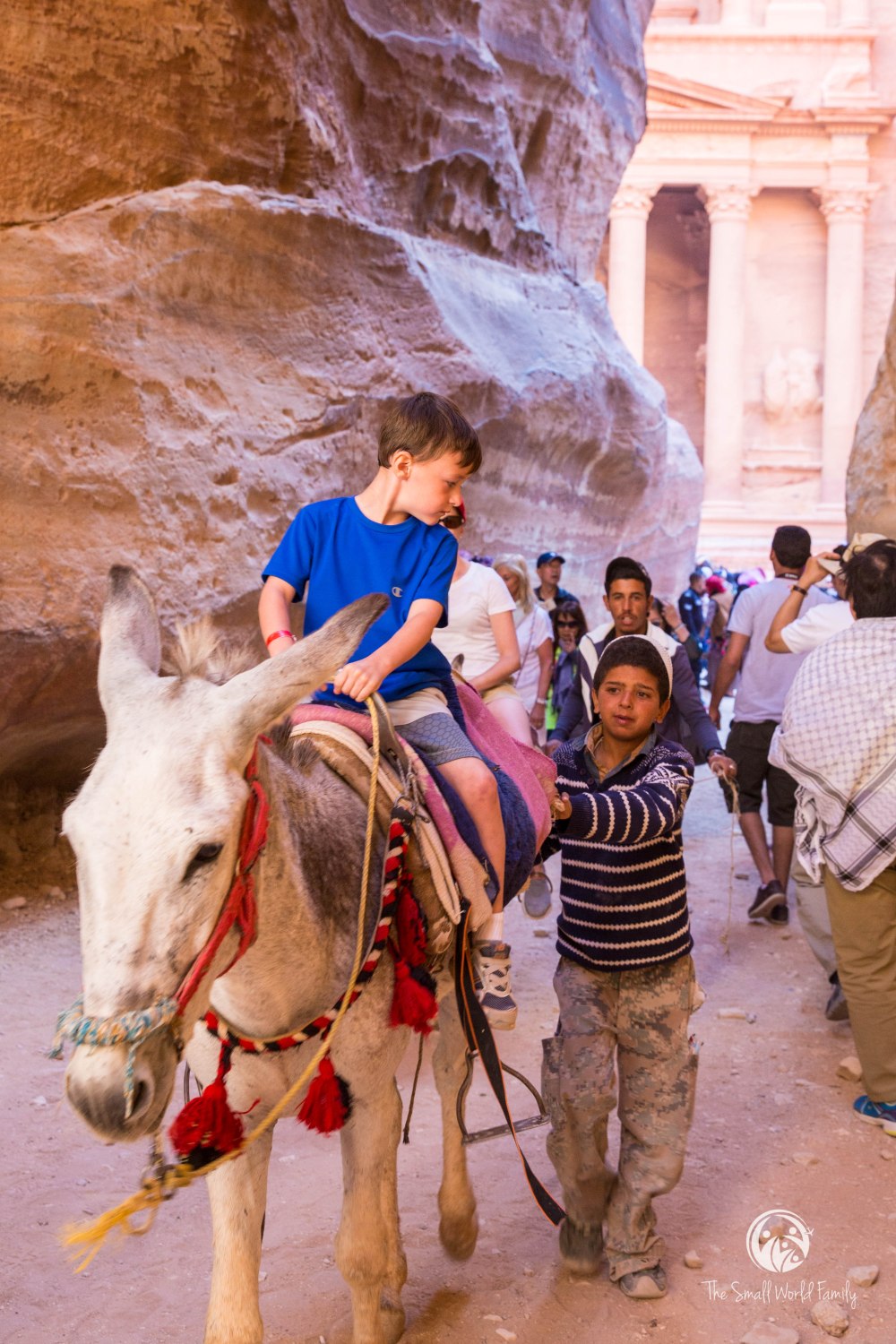 It was definitely our hope that the nap in the carrier would re-energize Lucy, for when we were to do our 4×4 tour of the Wadi Rum desert.  Timing this at sunset would only further make the ride through the red desert that much more beautiful.  However, to further add to the complexity of our day,  we hit a huge traffic jam on the road back toward the port, that started about 15 minutes before we got there. It took us about an hour and a half to get through the traffic jam.  At this point we were running 2 hours and 15 minute behind schedule and the concern for missing our boat was becoming quite real. We called an audible and scrapped going on the 4×4 Wadi Rum Excursion, for fear of missing our boat as we were fast running out of time to get back given the number of delays we had throughout the day. 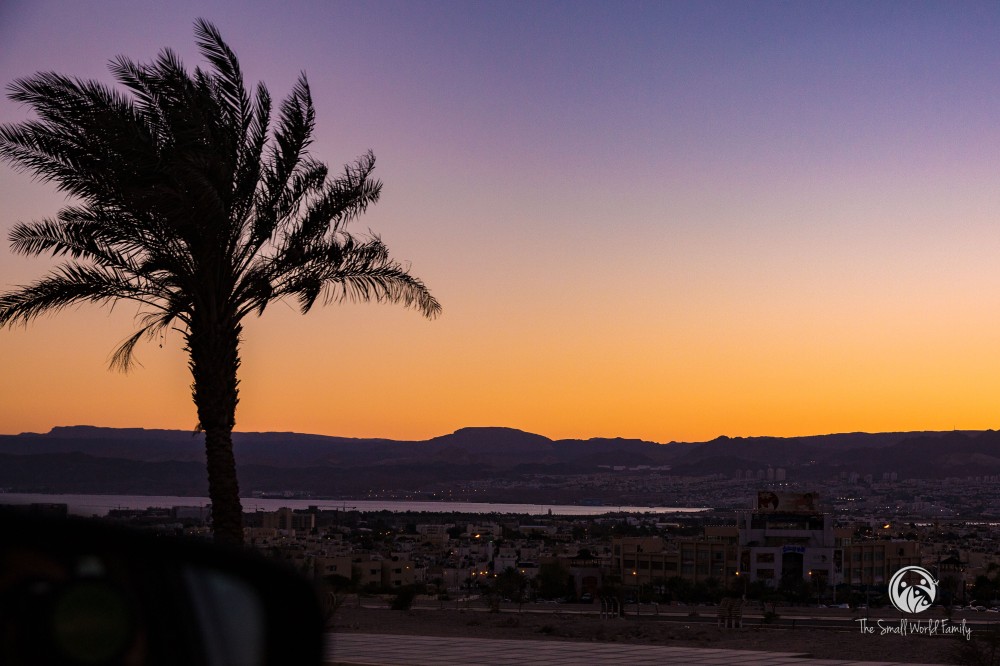 We got back to our boat with time to spare, as we did not realize it at the time, but all the cruise sponsored tour buses were stuck in the traffic jam an hour behind us.  It is cruise ship policy that anyone who books an excursion through the ship will not be left behind at the port due to a tour delay.  However, given our tour was not through the ship we were not guaranteed that courtesy, and wanted to make sure we would not miss our ship.

Despite all the hiccups of the day, it was still one of the most amazing experiences of my life. There is nothing quite like hiking through the canyon, and then slowly seeing Petra reveal itself before your eyes.

3 thoughts on “How to Visit Petra with a Toddler”