Today we woke up en route to New York City.  We set our clocks back an hour again last night.  I woke up at 530AM as this was the fourth time we set the clock back this cruise and I am waking up earlier and earlier with each hour gained.  Since I was up before the gym opened I decided to take some pics of the ship as the best time to take pics around the ship is early morning before everyone is up. It is very eerie to see the ship this empty given the sheer number of people I normally see around everyday. 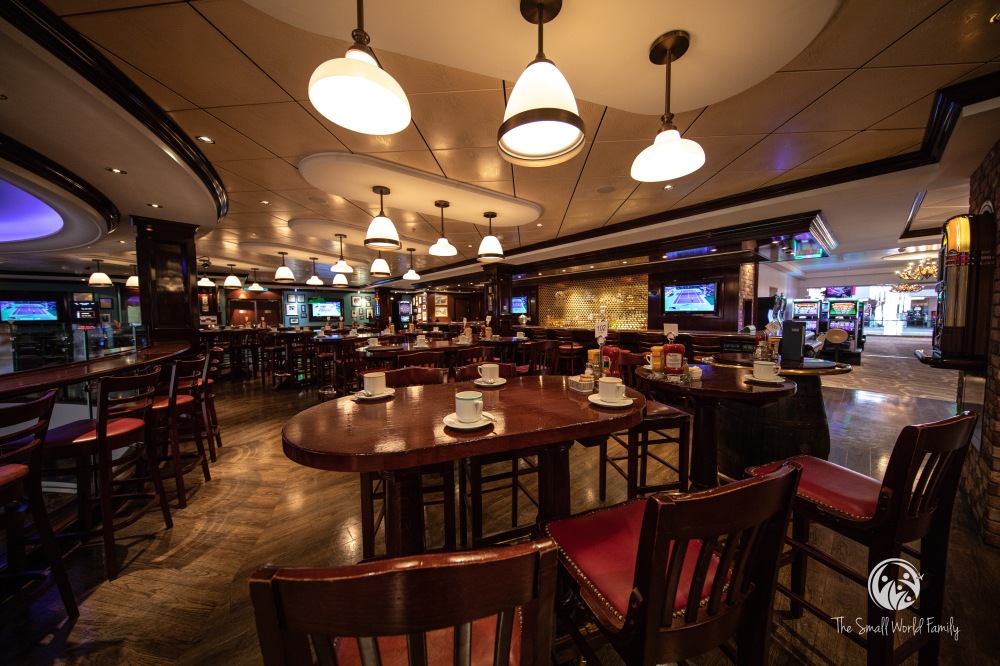 Once the gym opened at 6AM I headed that way. On our last westbound transatlantic cruise I noticed the gym getting busier and busier in the early morning with each hour that we gained, such that by the end of the cruise the gym was packed at 6AM. That trend has continued this cruise. Once I was done at the gym I wandered the ship until the kids and Kendall woke up.  Thankfully Kendall was not sea sick today.   The seas were still pretty rough, and they had the barf bags hanging around the stairwells.

We showered and were out of cabin by. 9:00AM.  We had planned to go to Manhattan dining room for breakfast but there was a long line so we went to Moderno instead. There were no surprises at Moderno for breakfast and it was the same breakfast the last several times we had eaten there. Zack ate cereal as always, and Lucy went crazy and decided to have some eggs, bacon and fruit this morning.

After feeding the kids we dropped the kids off at Splash Academy. We had an hour till progressive and camped out a table at Spiegel Tent for progressive trivia

We did a little better today as the cruise staff running it changed from the previous games. The questions were much more general knowledge and as such we got 10/20. Of note, the score reset mid cruise, so while this is progressive trivia, the scores have all been reset so we hopefully have a chance to win this round as it is a bucket list item of mine to win progressive trivia on a cruise ship.

After trivia we picked the kids up from the kids club and went to the atrium to play brain teaser trivia.

When we got to the atrium it was a Q&A about how to run a hotel with some of the hotel staff.  We managed to snag a seat by stalking one down after the Q&A ended.

We did not join a group and Kendall and I went 11/20 on Brain Teaser trivia. It was very difficult today with some very tough questions.

After wards we went to Moderno for lunch for the Island BBQ buffet. 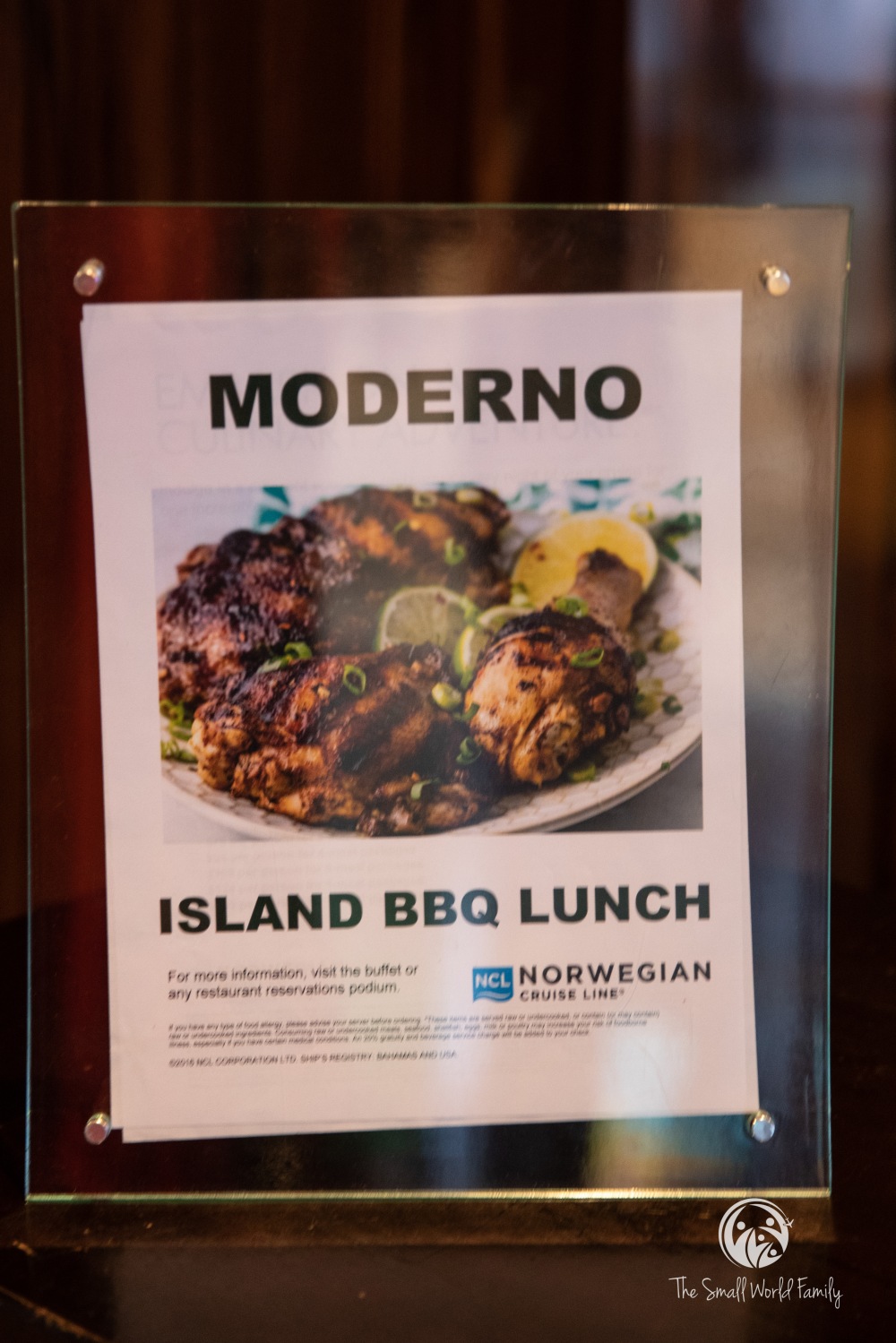 There were some BBQ ribs, Jamaican jerk chicken, corn on the cob, Rice and beans, and fried plantains on the buffet.  I had the ribs which were pretty good.

I would say I liked them about the same as the ribs on Royal Caribbean.

After lunch we went to see the matinee show today which was a comedy juggler, John Nations.   He was one of the better jugglers I have seen on a cruise ship,  and for a midday crowd he definitely had the crowd going.

He was extremely funny with some great jokes.  While he is a juggler his routine was not based on doing super complex juggling feats, but he did do the obligatory fire torches. 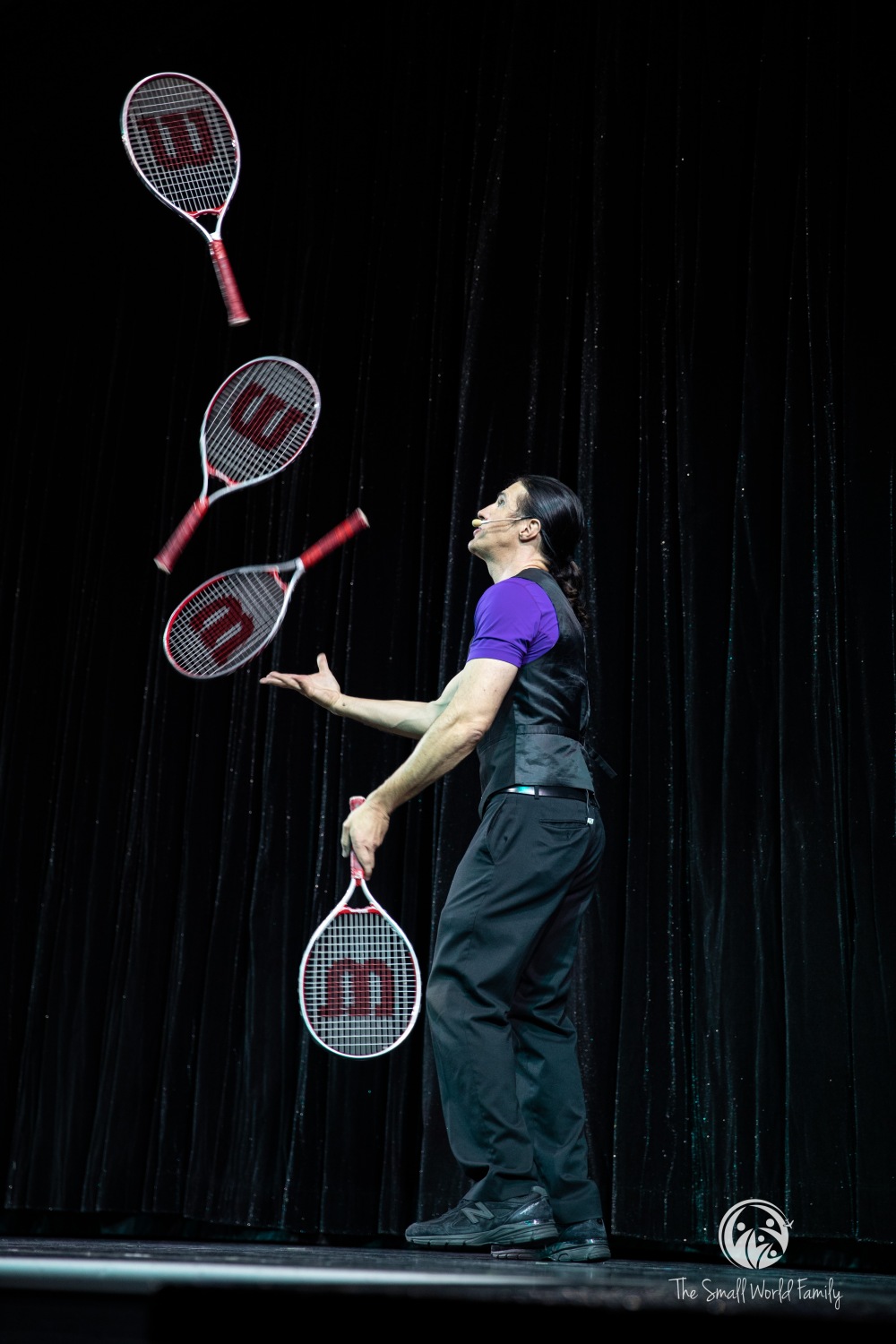 It was probably equal comedy equal juggling which made for a fun time.

Zack got picked to go on stage, and was super excited to help out John.

Lucy, however, fell asleep.  The late nights and constant play are definitely wearing her down.   Overall, his routine was just the right length and was great family fun for all ages.   We really enjoyed his show.

After the show we dropped the kids off at Splash Academy for a bit, and found a seat in Moderno like yesterday.

Moderno being considerably out of the way is one of the only consistent places we have found that has a seat.

We then picked up the kids at about 4:45 so we could make it to International Logo Trivia.

We got 18/20 and only missed Tissot and the logo for Norwegian Breakaway. We didn’t even know the Breakaway had a logo.

We went back to room to rest for a bit and went to dinner in Garden Cafe at 6:00PM.  It was American night on the buffet so we figured that should be a slam dunk for the kids to enjoy the food.

The kids had some pasta and we had BBQ wings.  Interesting enough, Garden Cafe was now eerily empty at night and it was a breeze to find a seat now.  We figured that after over a week eating on the ship people must be tiring of eating at the buffet, as during the first week of the cruise impossible it was nearly impossible to find a seat regardless of which meal it was.

Afterwards we dropped kids off at Splash Academy and headed to the Spiegel tent to watch Broadway of Ages.   We got there 30 min early and it was already very hard to find a seat.  This was a brand new show done in a cabaret style by the Rock of Ages cast.  Each singer sang a song of their choosing that was special to them.   Songs ranged from “Rent” to “Chicago” and it lasted about 45 minutes. After seeing the show we wish could have seen them in Rock of Ages but sadly could not find a time that worked for our scheduled.  The Finished on one of Kendalll’s all time favorite song’s “Seasons of Love” from Rent.   I did not have any pics of this as they requested no pics be taken.

Afterward we grabbed a quick snack at Shanghai, and we of course had the potstickers.

We then went to our appointment at the Svedka Ice Bar.  We dressed up in parkas and then went inside for 30 minutes.

The temperature is a constant -10 Celsius.  It was absolutely beautiful inside with a bar completely made of ice.

Got two drinks and 30 minutes in the bar for $20 dollars/person which isn’t bad, as $20 would be the cost of drinks alone on the ship.

The drinks were even served in a cup made of ice.

They had an ice throne you could sit in. 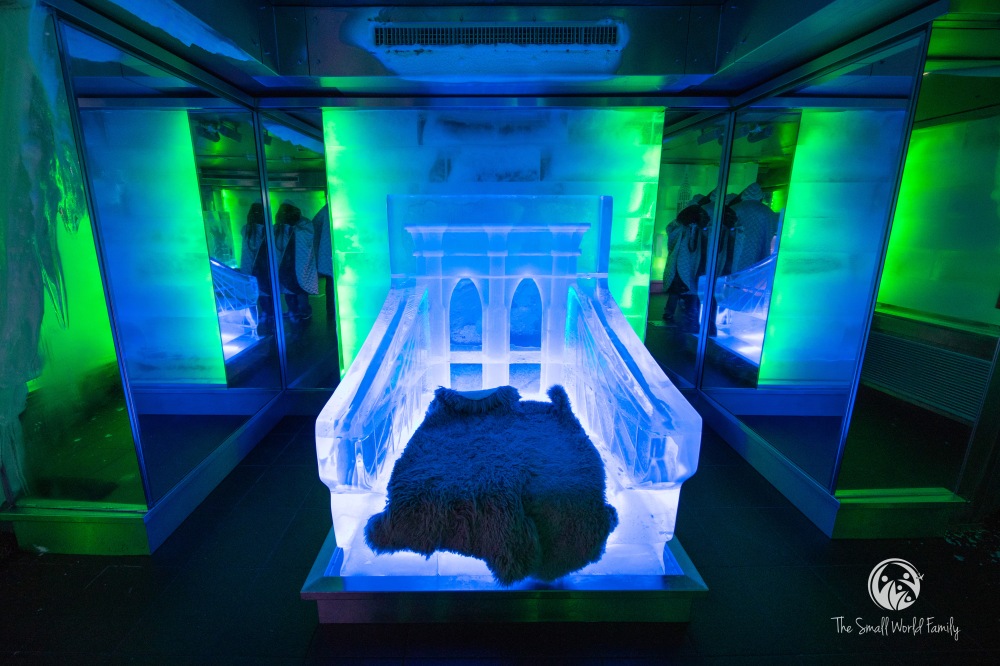 Kendall did her best Lady Stark impression from Game of Thrones. 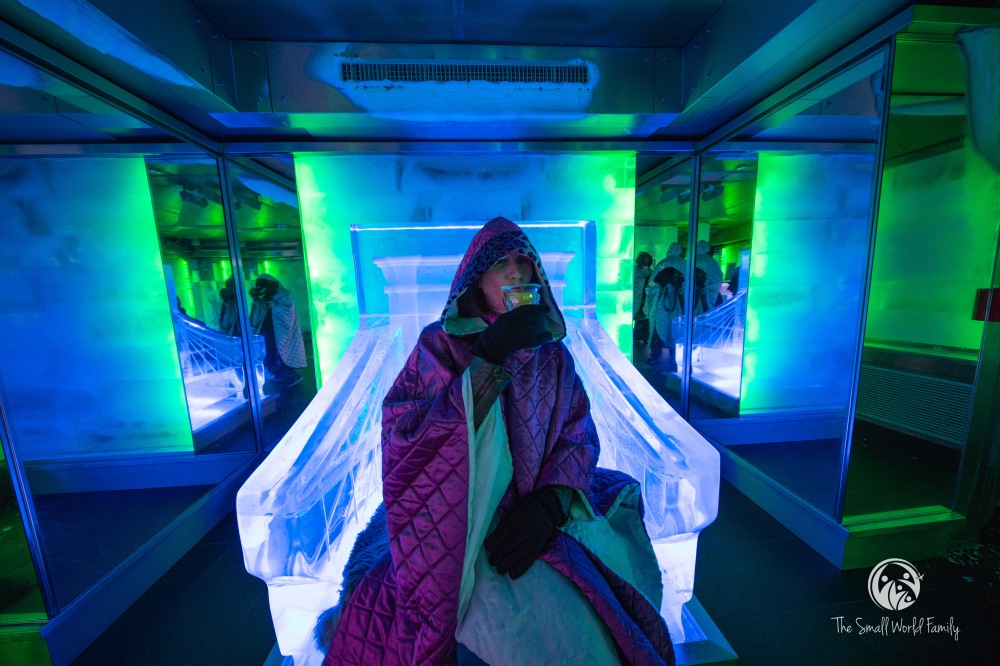 Afterwards we went to Syd Norman’s Pourhouse to listen to Roxy, the 80’s tribute band again.  My camera was so cold from being in the ice bar the lens fogged up.

They played a slightly different set.  As always it was a fun time and a packed house as always with no seats. After listening to them there was really nothing else on schedule we wanted to do so we went and picked up the kids from Splash Academy and called it a night. Tomorrow we wake up at sea.

I have also started to find it very annoying that daily planners are only available at guest relations. Most other cruises I have been on the daily planner is typically laying out for you to grab near guest relations. Thus you have to stand in line at guest relations to get a planner. This would not be an issue except the screens throughout the ship and the app that you can use are never accurate and not everyone remembers to stuff the planner from the night before in their pocket.