Today we woke up in the middle of the Atlantic Ocean on the 2nd of 5 straight sea days.  I woke up super early at 5:30AM as the clocks moved back an hour again. 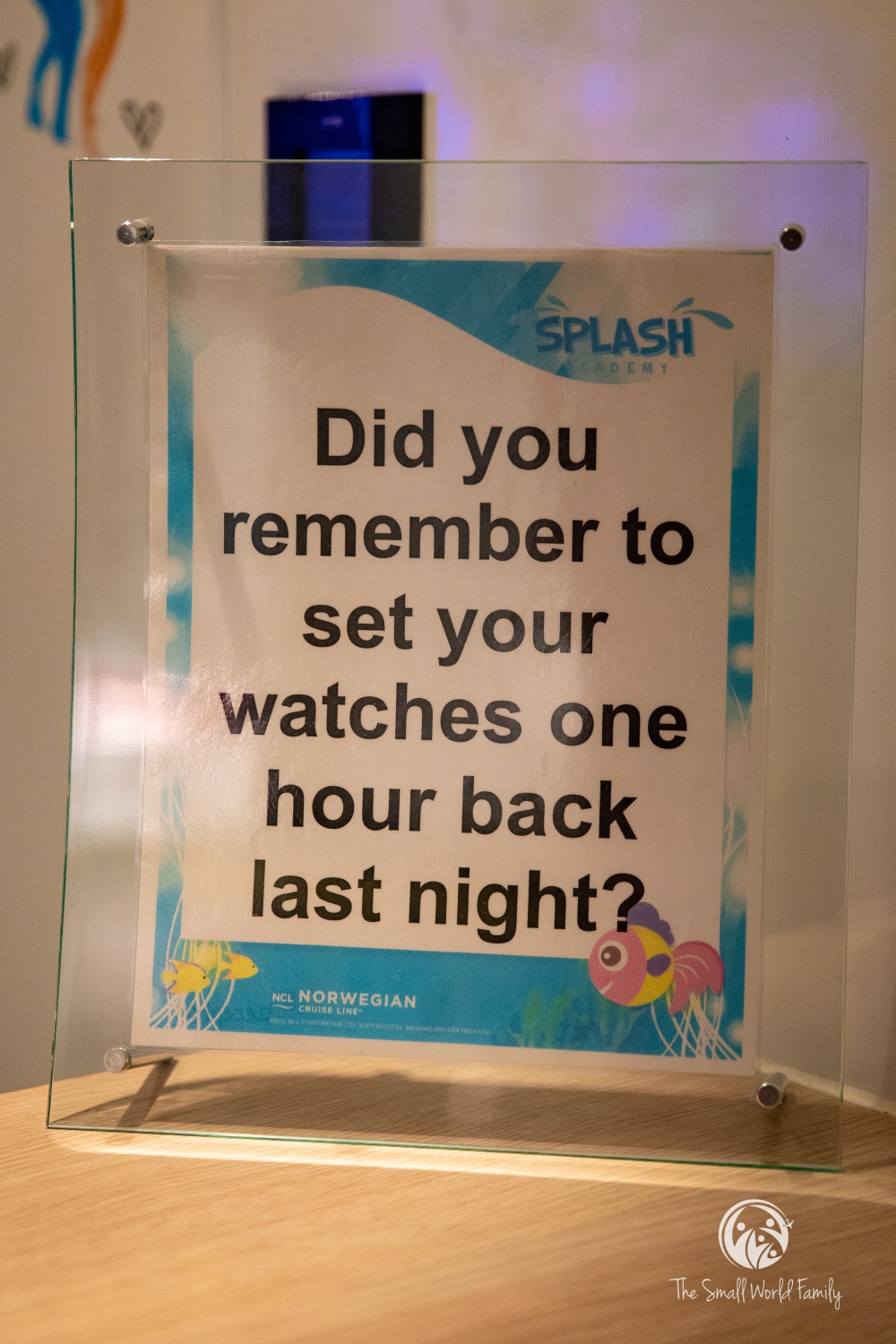 I decided to got to O’Sheehans as the gym was not open yet.  I grabbed a hot chocolate as an early morning beverage as I am not a coffee person.  Apparently the time changes are affecting everyone else as well as there were 10 other people there, when yesterday there was only 1 other person.

I went and worked out at the gym at 6AM when it opened.  It was PACKED by 6AM and by and 6:15AM all the cardio machines were taken.  After working out I wandered around the ship for a bit until the kids woke up.

I got back to the cabin and everyone showered, and went to our standard, Moderno for breakfast.  After 11 days on the ship,  we know exactly what to expect of Moderno, and today is no different.  After eating we dropped the kids off at Splash Academy and went to Savor to read as 2 of the main dining rooms have now been opened up for reading and card play now due to the lack of seats on the ship.

We were one of the first people there, and it was refreshing to have a quiet place to hangout for a change. 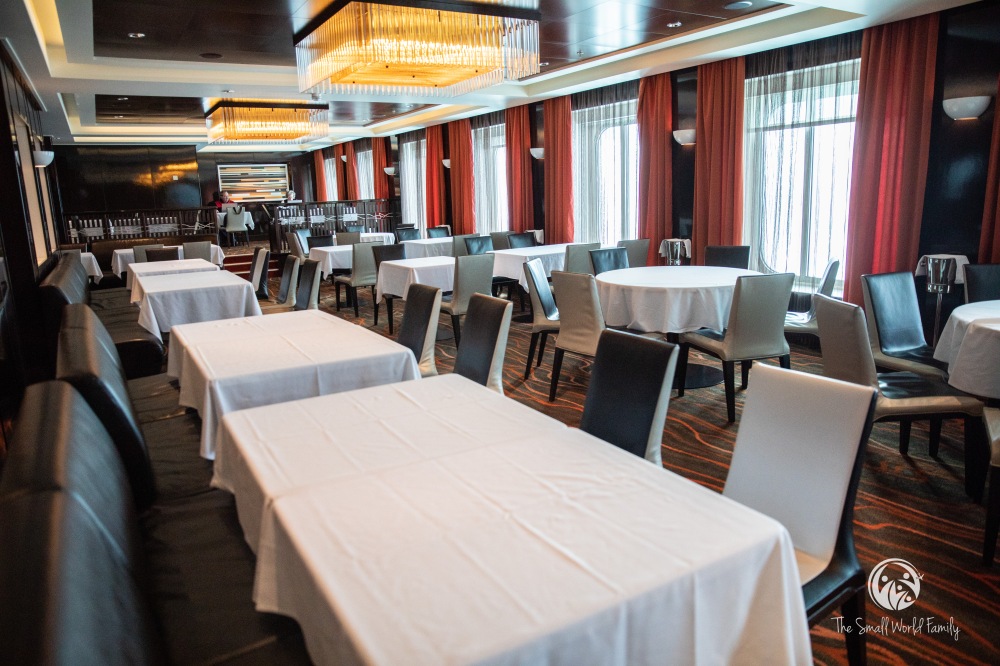 We can only hope that this place can remain secret. They even had cookies, water, tea, and coffee available which was a very nice touch. We would normally go to progressive trivia about this time, but strangely enough there was no progressive today.  We went to the Spiegel Tent to see if they forgot to put it on the schedule but they were setting up for a show.  We figured that due to the lack of venues on the ship to host activities they probably cancelled progressive today.  As always the theme of the cruise continues in that the ship has too many passengers for the size of the venues on board.

In an attempt to avoid the crowds of Garden Cafe we have been doing the Moderno buffet for the last several days.  Unfortunately, the secret is out as everyone has now discovered the efficiency of Moderno. The crowd at Moderno today was as bad as Garden Café and had to revert back to the table stalking.

It was Mexican day at Moderno and they had the same as last time.  The nachos and cheese and churros were just as good this time. 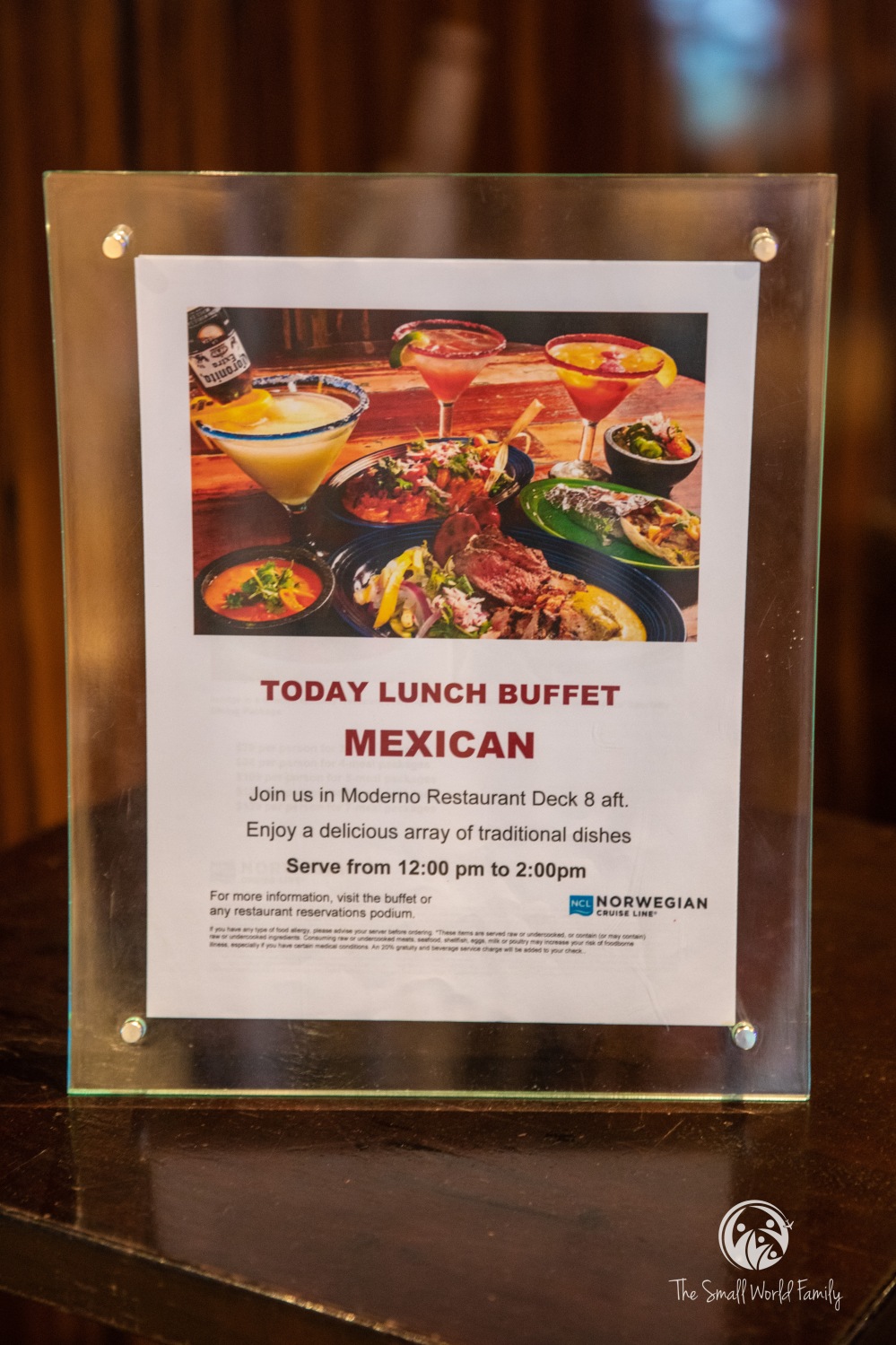 It was an absolutely gorgeous day today.  It was 70 degrees outside and sunny so Zack and I were excited to see if the sports deck was finally open.  However, the ropes course, rock climbing wall and sports activities deck are all still closed.

Not sure what it takes to open as I don’t think the weather gets much better.  There was minimal rocking on the ship, but and the wind gusts were higher when we did the ropes course in Gothenburg.  At this point, I think the ship basically has to be docked for them to ever open up the sports activities.

To help cope with the disappointment, I let Zack play one game at the arcade.  The arcade game prices are comparable to land, which is still expensive in my opinion, hence why it was only one game. So Zack and I went back to Savor after finding out the deck was closed while Kendall napped with Lucy as she has been getting increasingly grumpy over the last several days due to the late nights and endless playing.  On the way to Savor we ran into the juggler, John Nations, who was giving instruction on how to juggle.  Zack took to it naturally and really enjoyed seeing the juggler again. Lucy woke up from her nap and we dropped the kids off at Splash Academy.  We found a seat on the waterfront as the weather was gorgeous today. First time all cruise we have been at sea and been able to sit outside and enjoy the ocean.  The ship is a great ship when the weather is beautiful,  but it is unfortunately very poorly designed for cold or inclement weather.

I then went to try out Airports of the World Trivia. 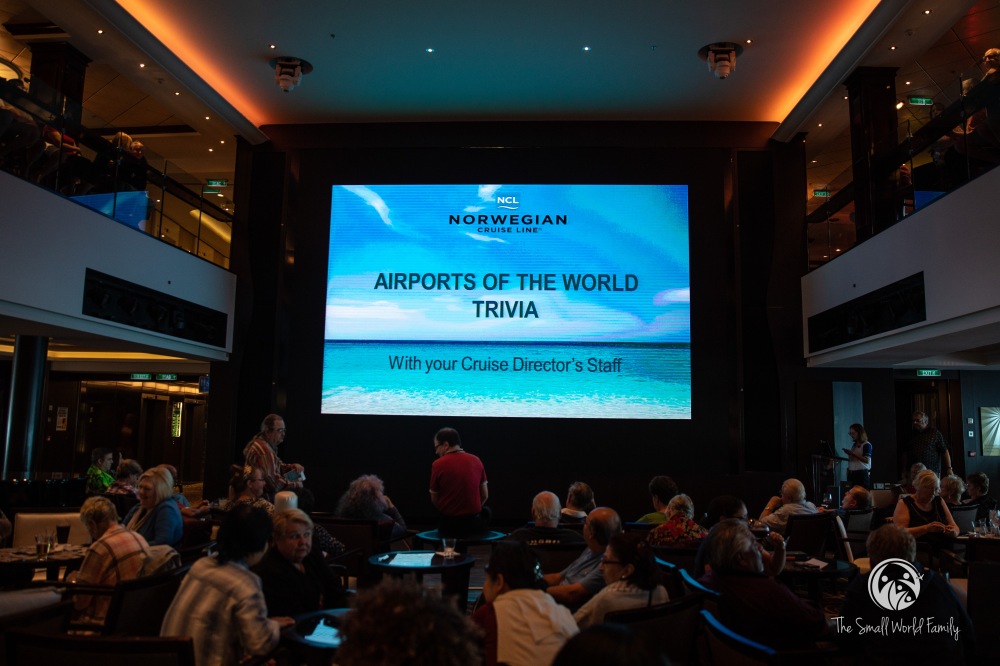 It was insanely hard, and I only got 6/20.  The winner did incredible nailing 18/20 right, on some EXTREMELY hard pictures.

We then went to pick up the kiddos at Splash Academy and went to the guppy room, which is a small play space kids 3 years and younger. 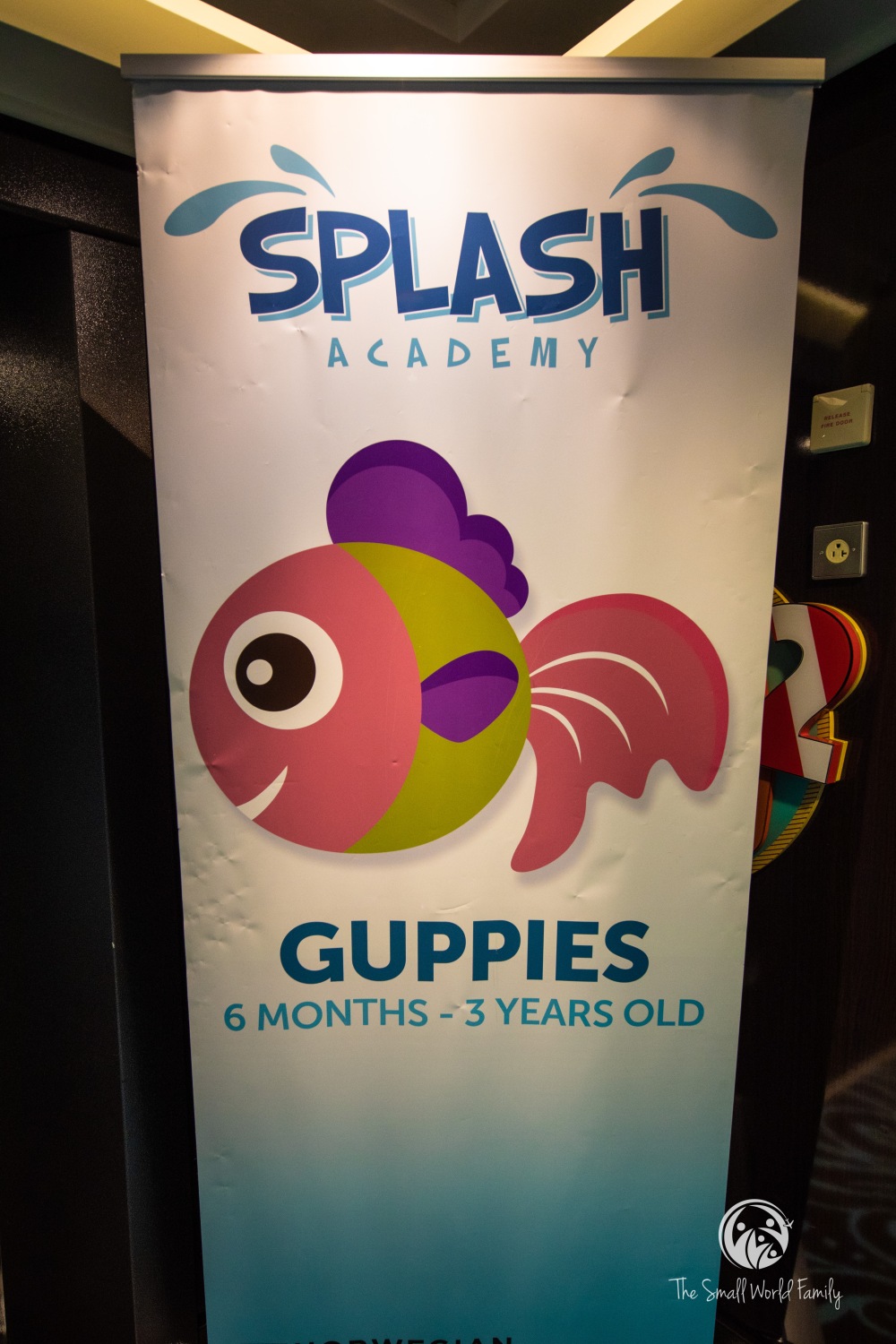 It’s a little young for Zack, but Lucy enjoyed playing there.  Thankfully, they FINALLY opened the ropes course back up  Zack and I got to go on it and the climbing wall as well.

Afterwards we hit up Garden Cafe.  It was the night I had been anticipating all cruise, which was Asian night and it thankfully did not disappoint. 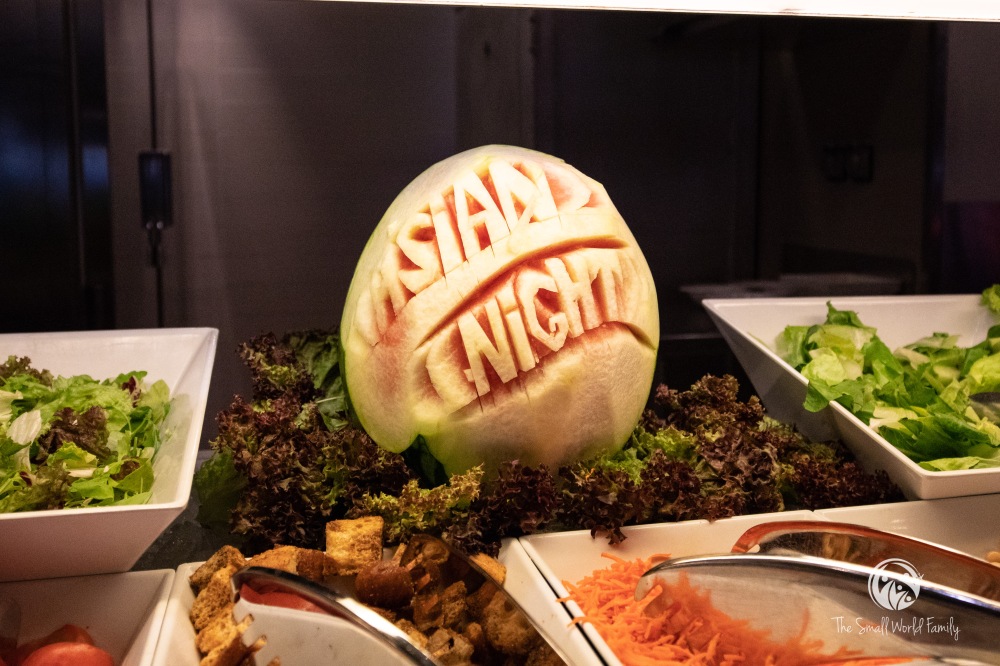 I was SUPER excited to see Peking Duck at the meat carving station on the main buffet. 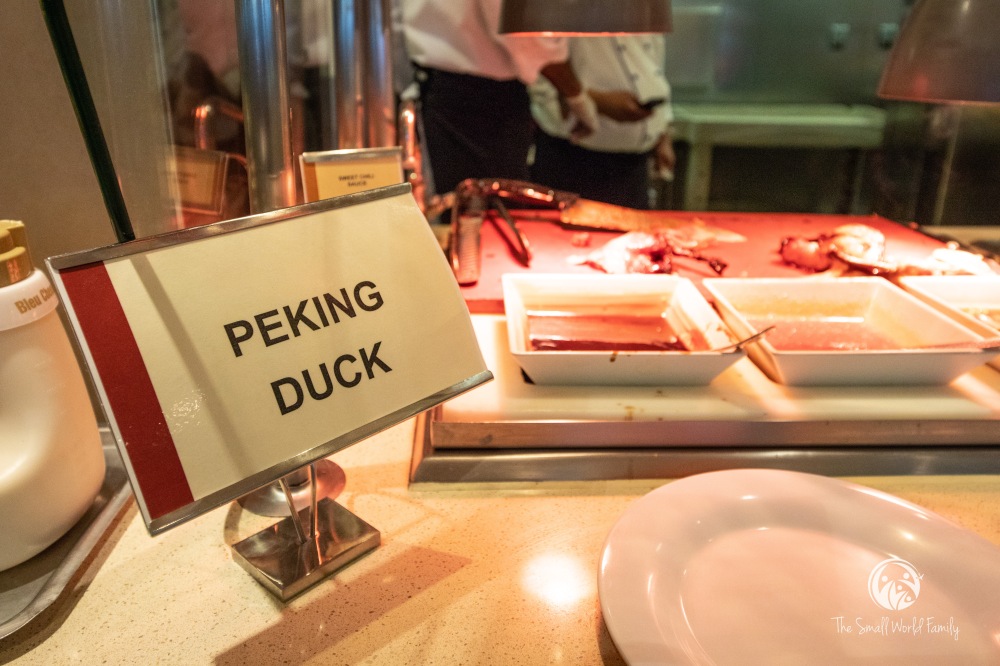 We saw Matthew at the buffet who was Zack and Lucy’s friend from Splash Academy who got on stage with the Magician, so we sat with him and his mom.  Garden Café continues to be deserted at dinner unlike the beginning of the trip. After 11 days people have moved on from the buffet into one of the many specialty restaurants on the ship.

Afterwards we dropped off the kids at Splash Academy and went to Mixx to have a drink. There wasn’t much on the schedule tonight that we wanted to do so we decided to call it an early night. Moving the clock back an hour every night is definitely starting to catch up to us. We went to pick the kids up and got them some ice cream at Garden Cafe, and then hit the sack. Tomorrow is another day at sea. If you are a trivia buff,  I strongly recommend against Norwegian Cruise Line.  Throughout the cruise I had noticed a lack of trivia, but assumed this was them saving the trivia for the transatlantic crossing portion.  Little did I know that when we starting crossing the Atlantic is when trivia would nearly completely disappear.  On this most recent sea day on a transatlantic cruise which is normally loaded with trivia the did not have progressive  and there were only two trivia events the WHOLE DAY. One which was early morning trivia which is difficult for most people to make due to the early morning time and the Airports of the World.

Everything else on the schedule were sales pitches disguised as activities. There is no music trivia, no afternoon trivia, no tribond, no evening trivia or really any trivia in general. This is in comparison to other cruises where trivia is quite abundant and nearly rampant on a transatlantic crossing with at least 4-5 trivia type contests a day. To not even have progressive trivia on a sea day on a transatlantic is a cardinal sin, one which Norwegian shockingly committed.