Disclaimer: Due to the high price the internet on the ship (.99/minute) we were unable to blog live for this cruise.  The events of this article took place on Oct 10, 2018.

Today we woke up in Ponta Delgado, Azores.  This group of islands is owned by Portugal. This will sadly be the last port on our trip as after this we have 5 sea days.

We woke up at 6:30AM with a goal to be off the ship by 8:30AM because we had an independent tour leaving at 9:00AM.   Kendall was strangely got seasick overnight AGAIN.  So strange as it always seems to hit her at night.  Either way, after two sea days all of use, especially Kendall, were all looking forward to setting foot on land.

We got dressed and ready in record time and had a nice leisurely breakfast at Moderno.  Since we were at Moderno before the sun was up, we got to enjoy a beautiful sunrise.

It was the typical Moderno express breakfast buffet with no real surprises.  The kids had cereal as always. Consistency is king in our family.

We disembarked the ship at 8:30AM. We had a brief 5 minute walk to the tour office.   It was a little cooler than we expected.  It was in the 50s, but the original forecast was 65-75, so we were a little disappointed. It was still a vast improvement compared to our last several ports.

We had decided to book an excursion to Sete Cidades from an independent company, Pico de Aventuras. The cost for all four of us was $200 by booking independently versus Norwegian where an identical tour was $316.

We checked in to our tour at their office which was located in a small harbor. It was a quick and painless process, and there were some restrooms were conveniently nearby that my kids of course had to use.

Our tour left 25 minutes late as we were waiting on a rather large group that was running late.  In the mean time, Zack and Lucy of course had to have a spontaneous dance party. We eventually boarded our bus and headed to our first stop which was a pineapple plantation.  Unlike in Hawaii, these pineapples are grown in greenhouse a greenhouse. The greenhouses are located smack dab in the middle of the suburbs which we found was kind of odd.  It was a nice little stop and there was a small gift shop and cafe there where you could order some pineapple related drinks and foods.  They also had rocks at this stop.  If you’ve been following along on our previous blogs, you should know that rocks are without a doubt more irresistible than candy for my kids.

While we were waiting for the rest of our tour group to leave Zack of course had to practice his balancing.

We then boarded back on the bus to make our way to Sete Cidades.  It was a very pretty drive.  There were lots of cows.

Apparently cows outnumber population of Azores two to one.  It was about a 40 minute drive to our first stop and Zack crashed out on the way.

After 40 minutes we stopped at our first stop, which was an overlook. This is typically the view you see on the postcards, and you can see why.  They had a small bathroom and snack stand here.  We would have liked to have grabbed a snack, but unlike the 3 previous countries that accepted credit cards everywhere, that was not the case in the Azores.  We normally have a bag full of snacks and drinks, but despite our leisurely pace this morning totally forgot Kendall’s bag on the ship.  We snapped a couple more shots and got back on the bus.

We then proceeded to make our way down into the crater toward the small village of Sete Cidades.  The roads were very curvy, and would be a drifter’s dream. This time it was Lucy’s turn to crash out. 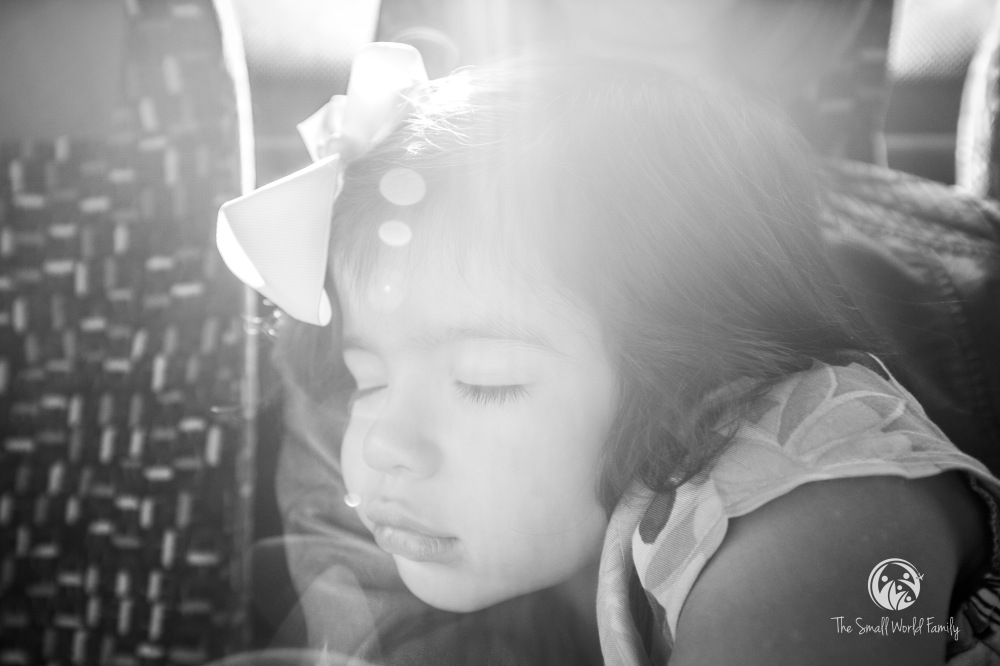 We eventually made our way to the village where there was a small canteen, Sausages Nicolau.  They did not accept credit cards, so I had to find an ATM.

We got 3 ice cream bars and 2 bottle waters for 7.00 USD.  This was without the cheapest place we have eaten this vacation, and after the prices in Denmark, Sweden, and England it was a breath of fresh air.  After our 30 minute stop we boarded back on the bus to start our way back toward town.

It would be 30 minutes till our final stop which would be another overlook of the coast.  We passed some beautiful countryside on the way. We finally make it to our final stop, and I must say they saved the best for last.  This was an absolutely stunning overview, and it reminded us very much of the Irish coast.

It was incredibly windy, and Lucy was super concerned that she was gonna lose her bow.

After a 40 minute drive we eventually arrived back in town at 1PM.   It had warmed up considerably and was in the 70s now.  We walked around town for a short bit just checking out the small shops and to buy our traditional souvenir magnet.  We stopped at the city square and let Zack and Lucy run around for a bit. 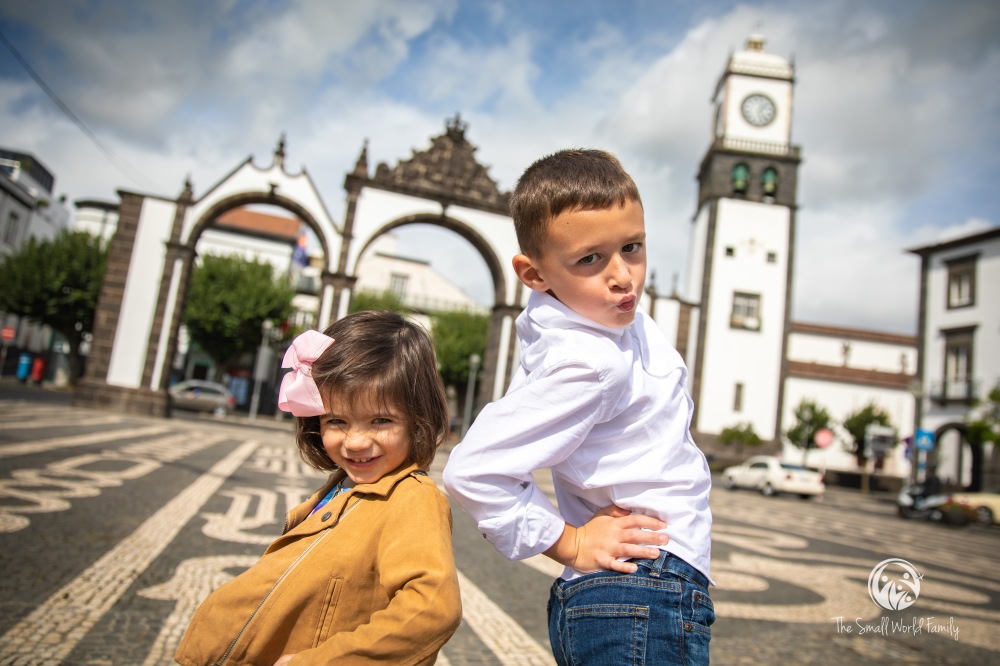 After stopping in the square we had a bite at the Cafe Royal.  We ordered a ham and cheese croissant and a donut and it was only 2.64.  That was cheaper than what we would pay in the US for those items.  The Azores has been very reasonably priced thus far.

We then walked for a bit on the waterfront area.

There was a small playground in front of the ship since we had two hours till our ship left and they were dying to play. 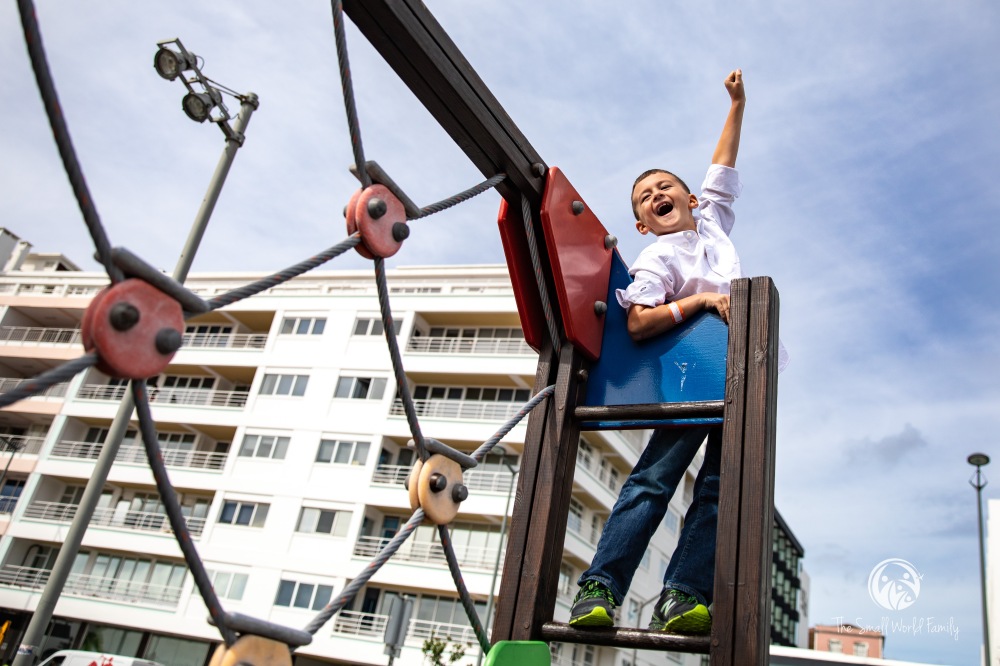 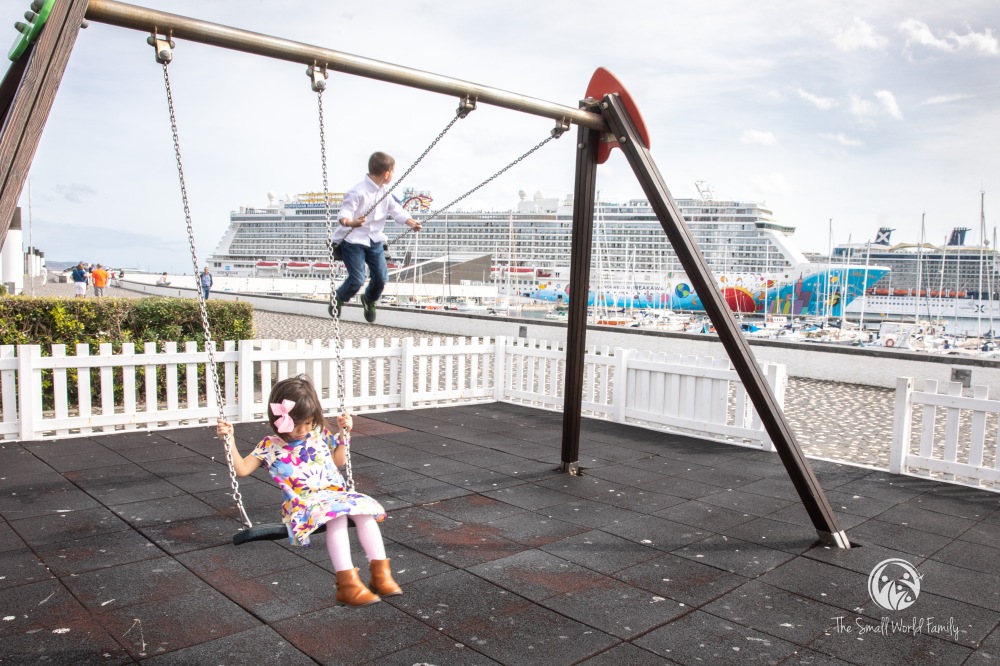 We eventually got back on the ship at about 3:15pm.  We dropped the kids off at Splash Academy and it was apparently a Luau.

I had been dying to run outside as it gets boring running on a treadmill and this was the first day in forever that the weather was nice enough, so I went for a run on deck while Kendall went to the gym.

We picked the kids up and fed them at O’sheehans.   They had some nachos and cheese, a hot dog, wings and fries.  We then dropped them off and went to the Manhattan Dining Room for dinner as it was a Mediterranean theme in Garden Cafe and neither of us is the biggest fan of Mediterranean food.

Nothing terribly appealing on menu so we both chose the rotisserie chicken.  This was our first time to Manhattan for dinner.  They had a band playing some soft rock which was a very nice touch.

Manhattan has a much more upscale country club feel vs the more modern Savor and Taste main dining rooms.  We do really miss the grandiose main dining rooms on the older Royal Caribbean ships as it really adds an ambiance when you are in a two or three story dining room.   Given we were not in a hurry to go anywhere we stayed for dessert. 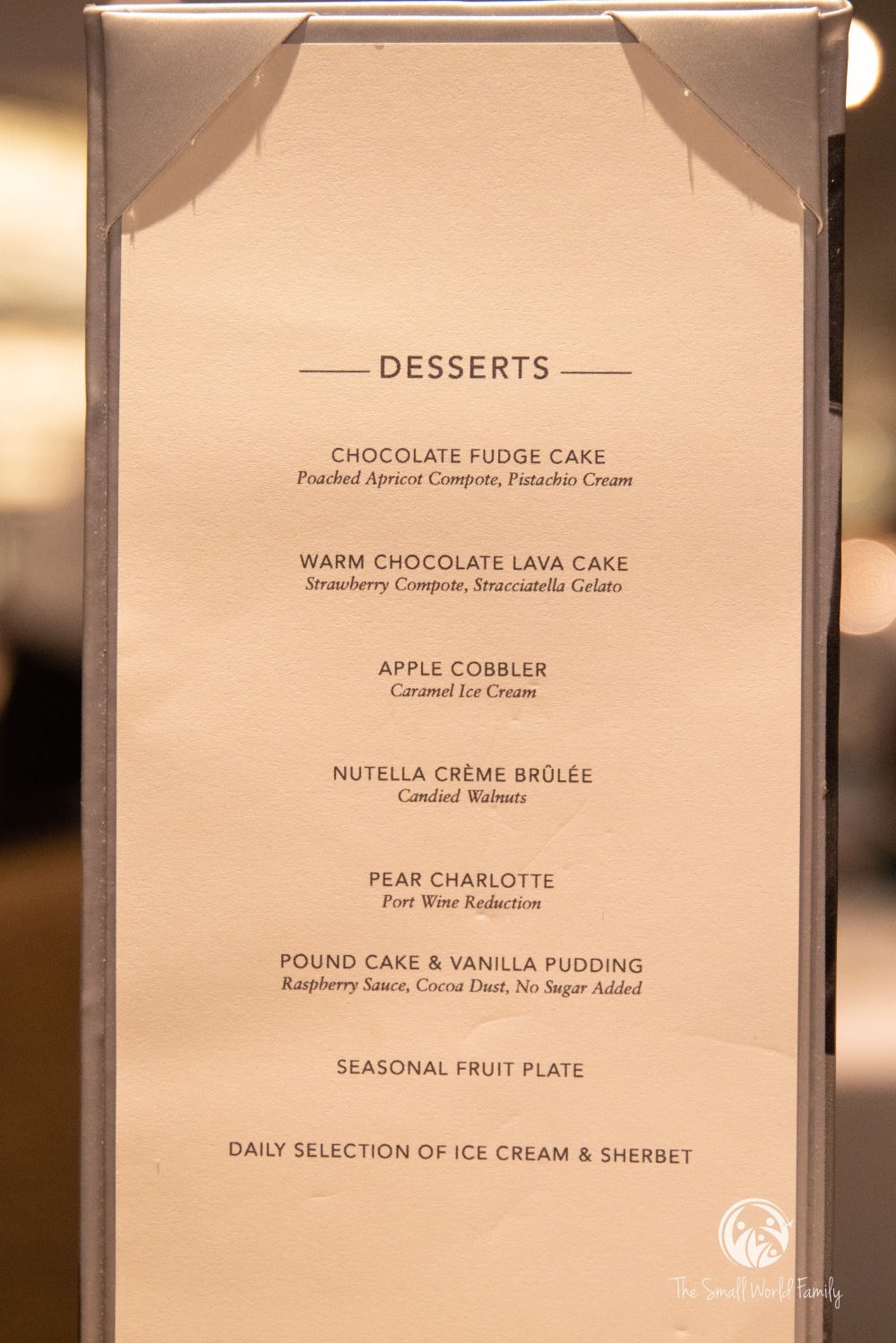 We both chose the Warm Chocolate Lava Cake and it was delicious. 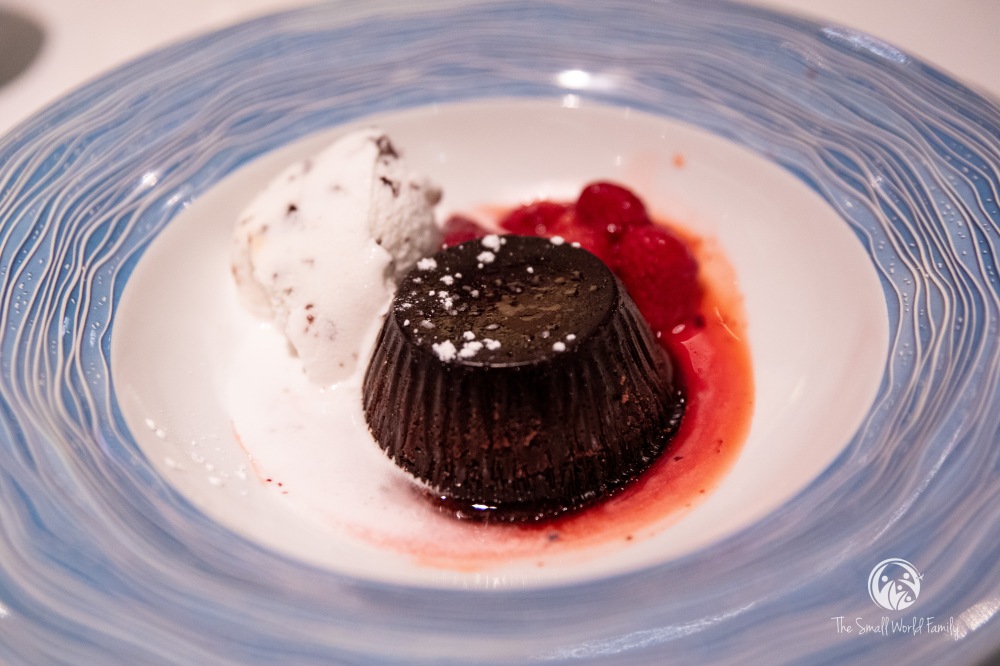 Afterwards went to Mixx for a quick drink and then stopped off at Headliners to watch a little bit of Howl at the Moon.

It was then time for the nights headliner act, The Mersey Boys,  a Frank Valli style quartet.  The name was incredibly creative, and when we get older on our future cruises we can only hope to see a “Mackstreet boys”, “M’sync” or “Old Kids on the Block” tribute group.

Given the era of music we were dealing with we were initially concerned that the music would be a little old for our tastes.  However, the quartet was actually pretty entertaining,  and played hits from Lionel Ritchie to Frank Sinatra.  however the complete lack of any “Jersey Boys”. songs was a little mystifying for a group called “Mersey Boys”

After the show we picked up the kiddos as Kendall was a little tired as she didn’t sleep to well the night before from being sea sick, and called it a night.  Zack absolutely loved the towel animal tonight which was a bird.

Tomorrow we is the beginning of our journey across the Atlantic and the 1st of 5 straight sea days.

After 8 days on the ship we are definitely missing music trivia.  There is absolutely no music trivia on the Breakaway, and the first cruise I have ever done without any.  Given the demographic, I would think this would be a very popular game to have.  There has also not been any movie quote trivia, or any trivia related to movies.  Actually, on that same note there is an extreme lack of trivia in general on the Breakaway compared to most other cruises which is a real disappointment for me as it is my favorite cruise activity.