Disclaimer: Due to the high price the internet on the ship (.99/minute) we were unable to blog live for this cruise.  The events of this article took place on Oct 9, 2018.

We woke up today continuing on our route to Portugal, and I am thankfully feeling a little bit better!  Ramon woke up early and went to the gym as always.  He said it was less crowded at 7 AM today.  After he got back, we went to to Moderno for breakfast.  I am so grateful that we found this place.  It has made feeding the kids breakfast so much faster and more efficient.   After breakfast, we dropped the kids off at Splash Academy.  We went to find a seat and relax for a little while. It was easier to find a seat today since it was an absolutely beautiful day outside so some people were sitting outside.

We found a seat at the Martini lounge.  It was warmer than it has been since were getting close to The Azores. 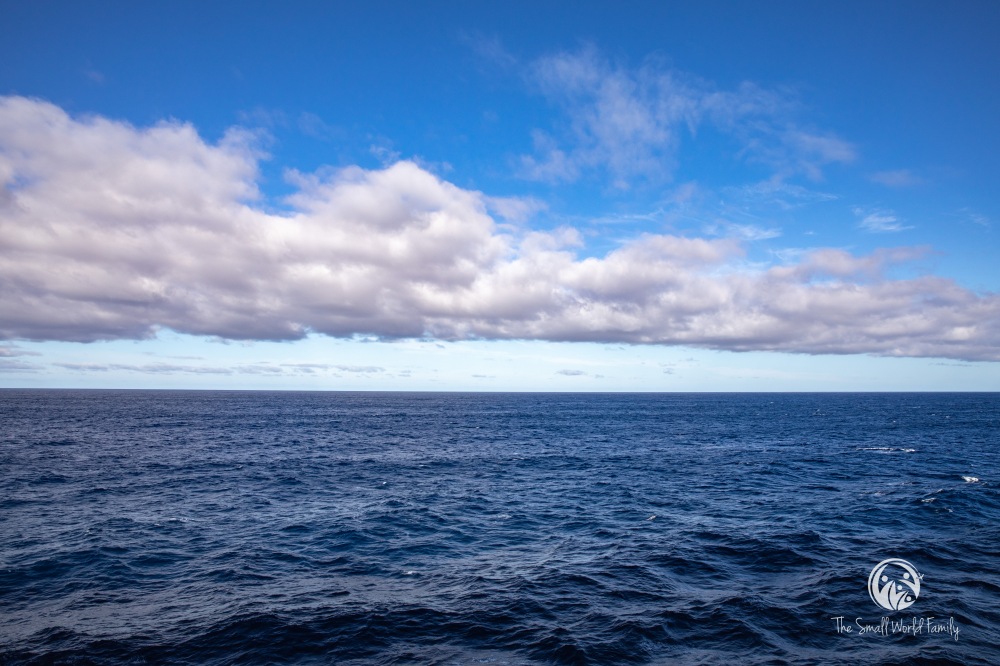 We were able to see parts of the ship we had never seen before due to the weather.

They even had free binoculars on the deck of the Waterfront.

It was a little to windy for me to be able to enjoy sitting outside, but some people did.  We were hoping that since the weather was nice they would open up the upper deck.  Zack has been really wanting to try out the bungie trampoline, but the deck was closed due to the boat rocking to much.

We decided to pick the kids up early from Splash Academy to watch the towel folding demonstration.  Zack absolutely loves these, and the highlight for him every evening is seeing which towel animal our stateroom attendant has made.  They showed us how to make several different animals, from penguins to monkeys.

We loved the demonstration, despite the fact that we were sitting on the floor, as always. The theme of this cruise continues. 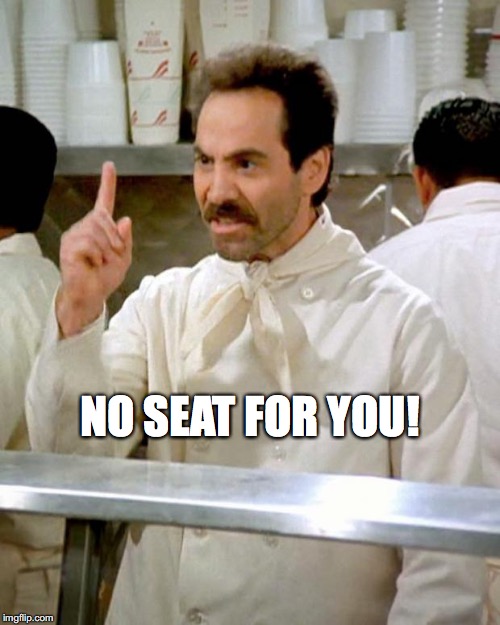 We chose to stay for brain teaser trivia, and actually found a seat.  We were not able to join a group due to the seating situation, but enjoyed playing trivia nonetheless. We scored 16/20.  The winner got 19/20. After trivia, we went to Moderno’s for the Asian themed buffet.  Ramon was more than a little excited about this.  The food was good, and we had Kung Pao Chicken and Sweet and Sour pork which became Lucy’s new favorite. 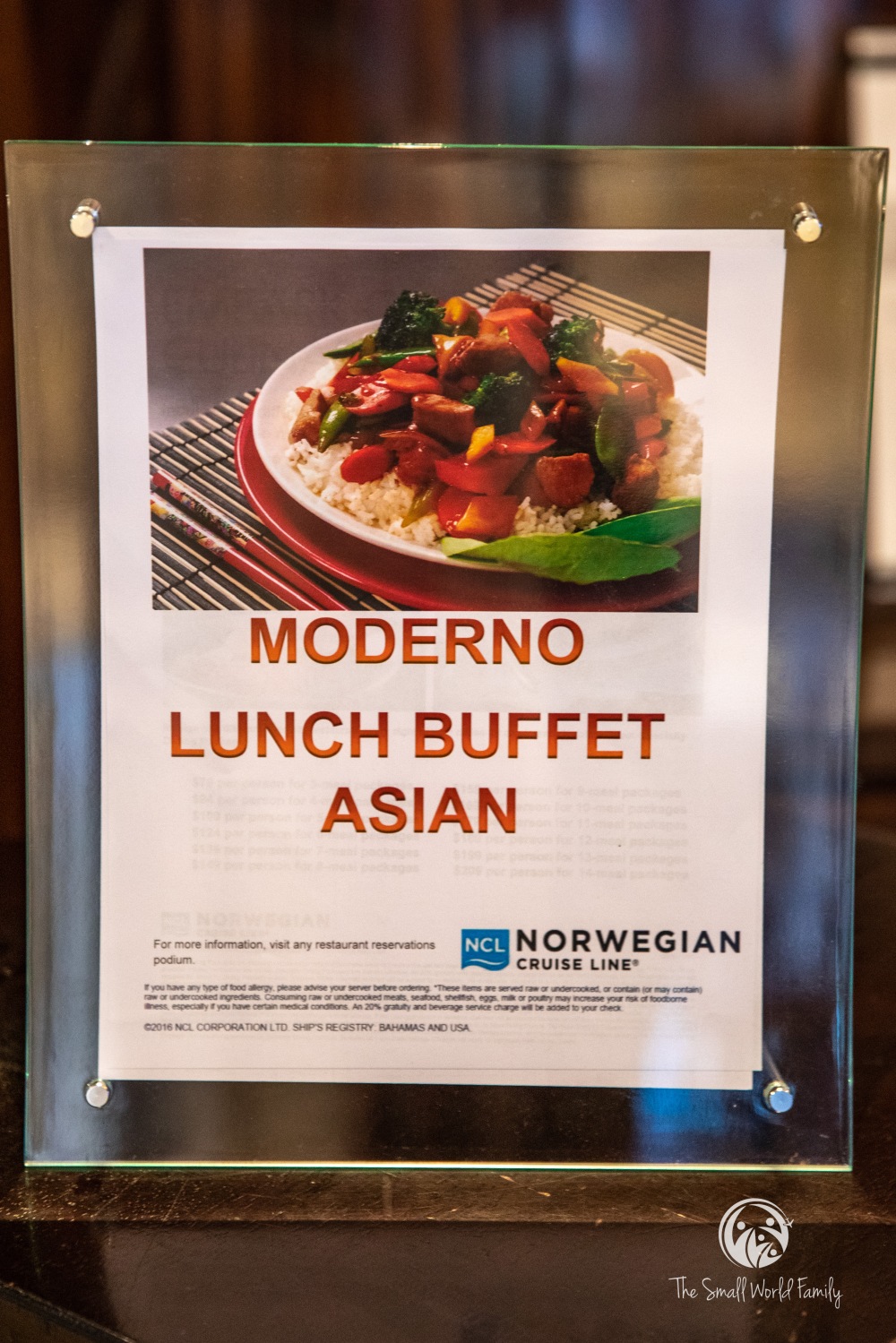 After trivia, we walked around the ship for a while trying to find a seat.  Thankfully, we found seats in Moderno!  The restaurant was set up for dinner, but the seats leading into Moderno were open.

At 5PM, we picked up Zack and Lucy, and had some quiet time in the room for about an hour, as there was nothing on the schedule that we wanted to do (or that we could do with the kids).

For dinner, we went to Garden Cafe.  The kids ate from the Kids Corner and had macaroni and cheese, fries, and a hotdog.  Ramon had beef with broccoli and rice (don’t worry, he picked the broccoli out).  I had pork and mashed potatoes.  We all felt the food was just “OK.” We dropped the kids off at Splash Academy, and went to have a drink at Mixx.  While we were there, we got a page from the Splash Academy staff that Lucy had an accident.  I went up to change her, and put her back into the kids program.  We were excited to hear the house band play at Sid Normans, but there were no seats available, so we left.  We found a seat outside the Ice Bar and sat down. We met a very nice couple from South Africa who highly recommended the Ice Bar and decided to try it later on in the cruise.

We were scheduled to see Rock of Ages, the broadway style show on board, but decided to opt out of seeing it tonight.  Our time was at 9:30, and the show ran about 2 hours.   We felt that was too late to keep the kids out tonight considering we have a 9am tour time tomorrow.  We have also seen this show before in Broadway, so we didn’t feel strongly about seeing it right now.

We went to pick up the kids from Splash Academy and called it an early night.  Tomorrow we explore Ponta Delgado, Azores.

We have noticed that there are a lack of trashcans on this ship… as in NONE.  The only place with a trashcan is the pool deck… which no one visits.  We have also noticed that there is a lack of actual trash anywhere.  We realized that having trashcans encouraged people to leave plates and cups around them, rather than set their trash on a table for the staff to pick it up. The ship definitely seems tidier than most Royal Caribbean ships that have trash cans readily available and is more on par with Disney in terms of cleanliness. We also noticed a lack of room service trays in the hallway as well.